Delhi Daredevils (DD) had not won a game against Mumbai Indians (MI) at Wankhede Stadium since 2012. The 2012 match had been their solitary win at the ground in 9 attempts. However, on Saturday, Jason Roy scripted history for DD as he helped them pummel MI by 7 wickets in Match 9 of VIVO IPL 2018. DD had thrashed MI by 7 wickets in 2012 as well. This is also the third-highest successful chase by DD. Roy, who replaced off-colour Colin Munro in the XI, answered skipper Gautam Gambhir’s call.

DD required 11 off the final over. Mustafizur Rahman, who had earlier dropped Shreyas Iyer twice, was handed the responsibility to provide MI their maiden win in 2018 IPL. Roy, who looked in top-notch form, dashed MI’s hopes with a four and a six with two violent swings. But Mustafizur hit back, beating Roy with three consecutive balls. Rohit Sharma got his fielders closer. Even, Gambhir, smiling throughout the chase in the DD dugout, looked anxious as Mustafizur ran in to bowl. Then MI lost their third consecutive thriller as Roy connected the swing and the ball soared over the semicircle of off-side fielders.

Chasing 194, Roy and Gambhir were off to a blazing start taking comeback man Hardik Pandya for a ride. Hardik went for 32 in his first 2 overs. Jasprit Bumrah and Mustafizur’s good lengths pulled things back a bit during the Powerplay overs, but DD still cruised to 50 within 5 overs. Then Gambhir was caught by Rohit at short mid-wicket.

Akila Dananjaya, who replaced out-of-form Ben Cutting, was also not spared by Roy. Akila gave away 47 despite bowling 6 dots. Roy was supported well by Rishabh Pant. The duo together stitched 69 runs, taking DD to the 100-run mark in the next 5 overs. In the process, Roy also notched up his maiden IPL fifty.

If there was any bowler who responded well to Roy’s carnage it was Krunal Pandya, with his yorkers. Krunal was also assisted by some stunning catches from Kieron Pollard and brother Hardik to remove Pant and Glenn Maxwell respectively. Then Shreyas Iyer and Roy’s unbeaten 60-run stand got DD their first points in the 2018 IPL.

Earlier, opening batting for the first time in T20 cricket, Suryakumar Yadav was in ominous form, smashing his second IPL fifty. Evin Lewis and Surya put up a century stand, setting to propel MI past 200. They even took MI to their highest Powerplay score of 84. After Rahul Tewatia dismissed the openers, Ishan Kishan punished the Delhi bowlers. Just when MI looked en course to 200, DD bounced back and cleaned the middle- as well as lower-order in the death overs. Tewatia, Trent Boult and Daniel Christian ended with 2 wickets each while Mohammed Shami got 1.

A total of 54 boundaries were hit in the MI-DD clash. 17 of them were sixes.

Player of the Match: Jason Roy. 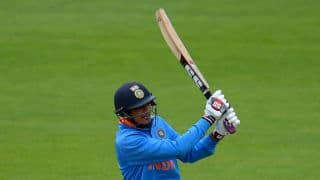