Jasprit Bumrah made his international debut in India's team against Australia for the fifth and final One-Day International at the Sydney Cricket Ground (SCG).

Jasprit Bumrah made his international debut when he was named in India’s team against Australia for the fifth and final One-Day International at the Sydney Cricket Ground (SCG). India have already lost the series 0-4, and will be hoping to avoid a whitewash. Bumrah is India’s third debutant of the series, with Gurkeerat Singh and Rishi Dhawan having made their debuts earlier in the third ODI at the Melbourne Cricket Ground (MCG). Bumrah, who bowls with a rather unconventional action, is a right-handed medium-pacer who has been on the fringes of national selection, having tasted success with the India A team in recent times. Bumrah also plays for Mumbai Indians (MI) in Indian Premier League (IPL). Live Cricket Scorecard: India vs Australia 2015-16, 5th ODI at Sydney

India have struggled with their bowling throughout the series, with their batsmen almost always putting the runs on the board only to see the bowlers concede the match. The fourth ODI at Canberra saw the Indian bowlers give away 348 runs, but India nearly won the match anyway. Virat Kohli and Shikhar Dhawan took India to 277 for 1 before a monumental batting collapse saw India bowled out for 323. Live Cricket Blog: India vs Australia 2015-16, 5th ODI at Sydney

Earlier, India won the toss and MS Dhoni elected to bowl first. Both teams made two changes each, with India bringing in debutant Bumrah and Manish Pandey for the injured duo of Bhuvneshwar Kumar and Ajinkya Rahane. Australia, meanwhile, were forced to drop Glenn Maxwell due to an injured knee and brought in Shaun Marsh, while resting Man of the Match of the fourth ODI Kane Richardson for Scott Boland.

Young pacer Jaspreet Bumrah gets his ODI cap. All set to make his Debut at the SCG #AUSvIND pic.twitter.com/M9HmZiw8S1

India will hope the inclusion of Bumrah will help strengthen the bowling. India are playing four pacers in Ishant Sharma, Umesh Yadav, Rishi Dhawan, and Bumrah. 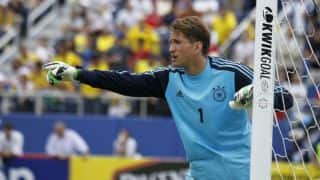