Dope control official took the pacer for conducting a test during the team s practice session at the Rose Bowl stadium in Southampton.

As Indian cricket team gears up for its first match in the ongoing ICC World Cup 2019, lethal pacer Jasprit Bumrah was taken for a doping test on Monday.

Dope control official took the pacer for conducting a test during the team s practice session at the Rose Bowl stadium in Southampton.

There were a total of two sittings in the test. In the first round, Bumrah was taken for a urine test and after 45 minutes, the blood sample of the pacer was taken.

Under every ICC event, every Board of Control for Cricket in India s (BCCI) player has to undergo a doping test conducted by the World Anti-Doping Agency (WADA).

A BCCI source confirmed that Bumrah was indeed taken for a doping test. However, the source did not reveal whether any other player is scheduled to undergo a doping test.

India open their campaign against South Africa at Southampton tomorrow, June 5. South Africa are under the pump losing their first two matches 0f the tournament, to England and Bangladesh and will be desperate to pick up a win against India.

The South African cricket team is two defeats down in the ICC Cricket World Cup 2019. Less than 24 hours after losing to Bangladesh at The Oval in London, the team has reached Southampton, a journey that by train takes less than two hours.

South Africa are not scheduled to practice today (June 3) at The Ageas Bowl, venue for the match with India in two days, but two men desperate to make an impact at the World Cup their last World Cup turn up in the middle of the ground.

Hashim Amla, who copped a blow to the helmet from Jofra Archer during the opening match of the tournament -which South Africa lost by 104 runs and then missed the Bangladesh game, and Dale Steyn who has not bowled a ball during in a live match so far.

South Africa are a fast bowler down with news that Lungi Ngidi faces at least ten days on the sidelines. Steyn has spoken of wanting to bow out on a high at the World Cup, but not being fully fit means he s sat out both of South Africa s matches.

Personally, Steyn and Amla, and collectively, as a team, South Africa are in a tough spot. Thus the commitment of Steyn and Amla on a warm afternoon spoke of their desperation to get back into the XI and help their team.

A little before 4pm local time, Amla and Steyn began a session on one of the practice pitches. Steyn bowls and bowls to Amla, who also receives throw-downs from a member of the coaching staff. 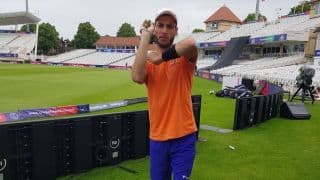 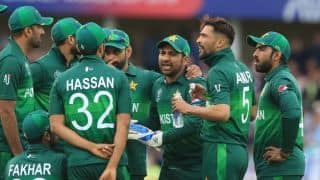