Sri Lanka took the lead in the three-match ODI series by 1-0.

India had a forgettable outing against Sri Lanka under their stand-in captain Rohit Sharma. India s batsmen were blown away by Sri Lanka bowlers as they were skittled for 112. On the other hand, the 7-wicket win against India came at an opportune time for Sri Lanka. Their 12-ODI losing streak came to an end, that too against the second-ranked ODI team.

Winning the toss played a crucial role for Sri Lanka, though Rohit went on to claim it was a good toss to lose. Sri Lanka coach Nic Pothas also highlighted the no-ball by Jasprit Bumrah that handed Upul Tharanga a life. Several fans had a sense of d j vu: in the Champions Trophy final earlier this year Bumrah had bowled a no-ball to Pakistan s Fakhar Zaman. Zaman eventually went on to score 111, and India never recovered.

There were two massive moments in the game

I firmly believe there were two massive moments in the game. Toss was one and the no-ball to Upul Tharanga. If we would have lost another one, we are suddenly 15 for three and it would have been a hugely different situation. We ve looked at two situations where for me they sort of defined the day.

Suranga is a world class bowler. If you give him the conditions that suit him, it doesn t matter to whom he bowls; he is always going to make life difficult. In his career so far, he has had to bowl on flat, dry wickets. You give him some greenery, he will be brilliant. Angelo looked great again. He has got his workload in. The physio has done some great work with him. He is not to full capacity yet. Angelo is a world-class performer and the way he handled that situation with the bat showed how important he is for us. 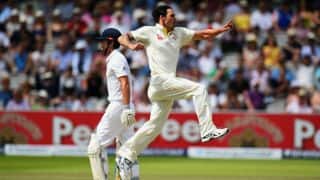