Pakistan's former captains Javed Miandad and Wasim Akram are hopeful that the national team can win the upcoming ICC Champions Trophy in England. 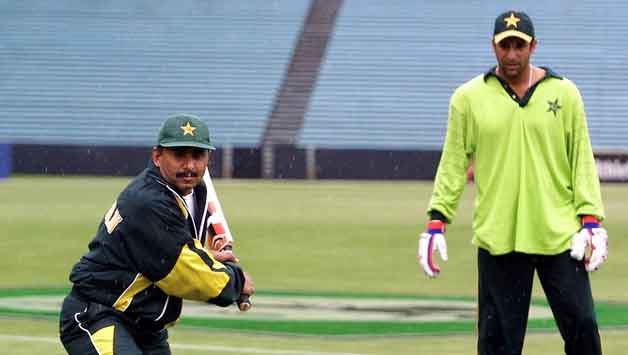 Pakistan’s former captains Javed Miandad and Wasim Akram are hopeful that the national team can win the upcoming ICC Champions Trophy in England.

The PCB has asked Miandad to assist the batsmen in the national training camp underway in Abbotabad while Akram is also there to work with the pace bowlers.

Both the greats have spent hours working with the players since reaching Abbotabad two days back.

According to details, Miandad, in particular, has spent hours helping the batsmen Misbah-ul-Haq, Asad Shafiq, Umar Amin while Akram has been training the likes of Mohammad Irfan, Junaid Khan, Ehsan Adil, Asad Ali and Wahab Riaz.

Even as the two greats worked with the players, head coach, Dav Whatmore and bowling coach, Mohammad Akram preferred to take a back seat and let them work independently.

“I always say before a major tournament that given the talent we have Pakistan is always among the favourites to win the title,” Akram told reporters in Abbotabad.

“Like Brazil in football we are blessed with a lot of natural talent. I believe that Pakistan has always had this ability of beating any team on its day. I am also confident about our team’s chances in this Champions Trophy,” he said.

Akram said that if the batsmen were able to post enough runs on the board, the bowling attack was capable of bundling out any side in the tournament.

“It will be a tough tournament but I am backing Pakistan because at this time of the year and over the years the pitches at most venues in England have flattened and our batsmen can score a lot of runs. If they do that our bowlers have the ability to win matches,” he said.

He pointed out that despite the absence of experienced pacer, Umar Gul the team was blessed with enough pace and spin talent and could upset any batting line-up.

Miandad advised the batsmen to go to England without any pressure.

“I have told them go and play in the Champions Trophy like they would in any other event. If you take the pressure of a big tournament and keep thinking, it does affect your performances,” Miandad said.

He said the Champions Trophy would be a close event because all the participating teams were playing well.

“Pakistan, India, England, South Africa and the West Indies are all balanced outfits and it will boil down to how a team plays on a particular day. There is little to separate the teams which have their own set of strengths and weaknesses,” he said.