After a watchful start from Upul Tharanga and Tillakaratne Dilshan - who went past 5,000 ODI runs during his 50 off 59 balls - came the partnership that would seal the fate of the game.

The venue was brand new, but the story was a familiar one. Sri Lanka, in a brimming and spanking new stadium, reasserted their supremacy on home soil, scoring 332, the fourth highest score in the country, and then strangled wickets at regular intervals to bundle out Canada for 122, taking their opening match of the World Cup by 210 runs.

That huge total was set up by their two most experienced batsmen, Mahela Jayawardene and Kumar Sangakkara, who led the way with a 179-run association after Sangakkara won the toss and batted first.

After a watchful start from Upul Tharanga and Tillakaratne Dilshan – who went past 5,000 ODI runs during his 50 off 59 balls – came the partnership that would seal the fate of the game. Canada’s bowlers did well to keep Dilshan quiet on a surface on which the ball stopped regularly, but there was something deadly to come.

The clumsiness set in as the ground fielding and catching fell to pieces, and good mates Sangakkara and Jayawardene combined to bat them out of the affair.

Sangakkara was bogged down for some time, unable to force the pace, but Jayawardene walked in and was immediately into a special rhythm.  Jayawardene took his chances but they were calculated risks. He batted serenely, milking the slower bowlers with ease with a series of well executed improvisations.

He successfully kept the scoreboard ticking over, not merely with clever singles, but with swipes and glides to the boundary on both sides of the wicket.

The manner in which Jayawardene gently manhandled Canada’s spinners – with soft hands, beautiful timing and subtle placement – made it impossible to stem the flow of runs. His shot-selection was perfect and a reverse-sweep from off stump off John Davison was sufficient proof of the authority with which he handled Canada’s bowlers.

Sangakkara, dropped on 12 at backward point, was more reserved than normal, but having reached his 60th ODI half-century off 63 balls, started to swagger and bludgeon thereafter, before he tamely chipped a return catch to Davison for 92 off 87 balls (267 for 3).

Jayawardene breezed to his century off just 80 balls – the fastest by a Sri Lanka in the World Cup – and swept the next delivery straight to Balaji at short fine leg to gift Davison another wicket. He had done his job, and how.

The batting Powerplay was immediately taken, after 44 overs with the score 276 for 4, and though Sri Lanka lost their way during that period they finished with a total that proved way too much for Canada.

When Canada replied, it was bad news from the word go. Davison, still a dangerous prospect at the age of 40, was the first to go, bowled first ball by Thisara Perera. Ruvindu Gunasekera, a rising young star of Canadian cricket now appearing in the country of his birth, cut a wide delivery from Nuwan Kulasekara to cover where Dilshan snapped up the catch.

Zubin Surkari was left off first ball when Thilan Samaraweera dropped a sitter at first slip, only to fall lbw to Perera for 6. With only 12 on the board three wickets were down, and the road ahead looked bleak.

Ajantha Mendis was played out for consecutive maidens, Muttiah Muralitharan had two referrals turned down, and it was Samaraweera who found success with his part-time spin, ending Jimmy Hansra’s torturous innings of 9 from 49 balls with some help from Sangakkara behind the stumps. Canada were 42 for four from 17.5 overs.

Ashish Bagai resisted for a while, but Perera’s return to the attack proved why he is rated so highly by his captain. Perera has, in his brief international career, proven to be a bowler whom batsman cannot resist for too long; sure enough, three balls into his return and Perera drew a thick outside edge from Bagai which Sangakkara happily accepted.

Soon after there was more trouble as Kulasekara drew two outer edges with his nagging offcutters. Rizwan Cheema delayed the inevitable with a breezy 37 and from there to abject embarrassment it was a short road. 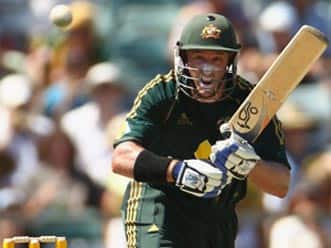 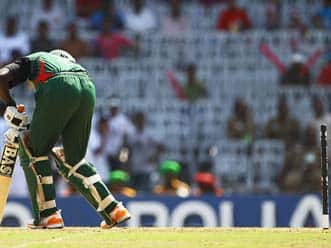