Rodrigues become only the second player in the Women's Super League 2019 to register a ton, scoring 112 not out

India women’s batting star Jemimah Rodrigues become only the second player in the Women’s Super League 2019 to register a ton, scoring 112 not out in Yorkshire Diamonds‘ four-wicket win over Southern Vipers in the 26th match of the league played at York on Sunday.

Rodrigues, 18, is one of the only four India players to feature in the league – others being Smriti Mandhana, Harmanpreet Kaur and Deepti Sharma – and the right-hand bat is currently the second highest run-getter in the league with 341 runs in nine matches, behind only to Southern Vipers’ Danielle Wyatt who has 362 runs in eight matches including a hundred. Wyatt was the first player to reach the three figure-mark, making 110 off 68 balls against Surrey Stars, a week ago.

Rodrigues’ effort is now the highest individual score in the league and came of just 58 balls with the help of 17 fours and one six. She came in to bat the first over, in a chase of 185 and carried his bat through the innings. The next best score for Yorkshire was just 23 from No.4 batswoman Hollie Armitage followed by 22 from Alyssa Healy.

The Indian international put on valuable stands of 90 with Armitage and 49 with lower-order batswoman Leigh Kasperek, who made 12 off 13 balls.

Earlier, after being put in to bat, Southern Vipers were buoyed by a solid batting performance by the top-three of Suzie Bates (47 off 39 ball), Wyatt (42 off 20 balls) and skipper Tammy Beaumont (33 off 29 balls) and they went on to post 184/4. 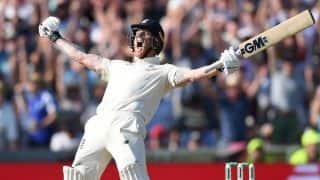