Tripura skipper Yogesh Takawale‘s valiant half century went in vain as Jharkhand scraped to an 11-run victory to begin their East Zone league campaign for the Syed Mushtaq Ali T20 tournament with a win at the Eden Gardens.

Chasing 139, Tripura, who had lost to Odisha in their opening fixture, lost wickets at regular intervals but Takawale held the fort by slamming three sixes and four boundaries en route to a 49-ball 58.

The former Maharashtra batsman struck two sixes and one boundary for 19 runs against seamer Rahul Shukla in the penultimate over to take his side to 20 runs shy of target.

But Takawale lost his cool as he did not find any support from the other end and was bowled by left-arm pacer Jaskaran Singh in the second ball of the last over as Tripura were restricted to 127 for seven and remained on the verge of elimination with second defeat.

Singh was the pick of Jharkhand bowlers with figures of three for 27 while left-arm spinner Sarfaraz Ashraf picked two for 20.

Earlier, opener Ishank Jaggi (36 from 29 balls; 6×4) and skipper Saurabh Tiwary (25) pushed their total to 138 for seven after they elected to bat.

Jharkhand too did not have any partnership going in the middle and struggled to cope with the slow wicket.

Tripura took wickets at regular intervals with Manisankar Murasingh, Tushar Saha and Subash Chakraborty claiming two each as Jharkhand could not break free.

It was Kumar Deobrat (16) and Kaushal Singh (16 not out from 11 balls) who propped up their total, something that proved just sufficient in the end. 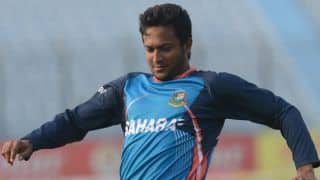