Punjab made a rollicking start against Karnataka as they reached 138 for two at lunch on the second day of the Ranji Trophy semi-final match at the Punjab Cricket Association Stadium in Mohali on Sunday.

Jiwanjot Singh and Manan Vohra led Punjab’s charge against their South Indian rivals as they put up a strong partnership of 85 runs for the first wicket.

But this was after they made a cautious start after Karnataka captain R Vinay Kumar won the toss and invited the hosts to bat first.

Manan and Jiwanjot batting cautiously early on, not giving any opportunity to the tourists’ bowlers to capitalise. After seeing off few initial overs, they took the attack to the opposition and played strokes around the park.

Manan struck eight boundaries and a six to score 51 off 50 balls, before he edged one to wicketkeeper CM Gautam off Rohit More. Manan’s dismissal got Taruwar Kohli at the crease, who got into the groove soon and took Punjab past the 100-run mark with Jiwanjot.

However, Kohli’s stay at the crease was over in the 32nd over of the game when Shreyas Gopal had him caught by Lokesh Rahul. Jiwanjot was batting on 54. 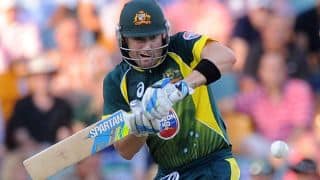 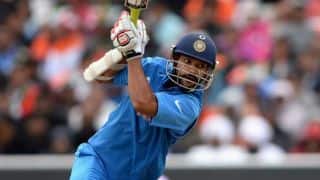