Short blasted 257 off 148 to power WA to 387-all out in 47 overs at the Hurstville Oval in Sydney. It seemed that Queensland will end up chasing down the target when centurion Sam Heazlett combined first with Chris Lynn (58) and Charlie Hemphrey (46) to keep them in the hunt. However, Tye and Jason Behrendorff (3/40) put their hopes to rest as Queensland were bowled out for 271 in 42.3 overs.

The start of the day was Short who rewrote history when he belted a record-breaking 257 – the highest score by an Australian in one-day cricket which and also the third highest in the List A history. The 28-year-old reached his hundred off 83 deliveries. He then sprinted to his next hundred taking just 45 deliveries. He kept getting better and to reach from 200 to 250, he took just 16 balls and.

When he was finally dislodged, Short had recorded the third highest total in men’s one-day history after Surrey’s Ali Brown (268 vs Glamorgan) and India’s Rohit Sharma (264 vs Sri Lanka).

His innings came after WA lost their openers cheaply in three overs. Heazlett though led a spirited chase, scoring 107 off 102 but his dismissal off Behrendorff sealed the fate of the contest. 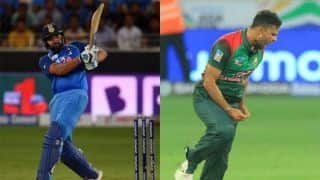