Pacer Andrew Tye and Umsan Qadir, son of Pakistan legend Abdul Qadir, starred in the win claiming three wickets each as Victoria were bowled out for 200.

Western Australia continued their unbeaten run in the JLT One-Day Cup registering their third win in as many matches to maintain their stronghold at the top of the points tally with a six-wicket win over Victoria at Melbourne on Wednesday.

Pacer Andrew Tye and Umsan Qadir, son of Pakistan legend Abdul Qadir, starred in the win claiming three wickets each as Victoria were bowled out for 200. In reply, WA opener Josh Philippe top-scored with 65 before Marcus Stoinis steered the chase with an unbeaten 47 off just 26 deliveries.

Opting to bat first, Victoria were reduced for 11 for two with opener Marcus Harris falling to Jhye Richardson for two followed by No.3 batsman Nic Maddinson departing for one to Nathan Coulter-Nile. Qadir, a leg spinner like his father, proceeded to remove Victoria Cameron White, who opened the batting, for 19.

Skipper Peter Handscomb and Glenn Maxwell then rebuild for Victoria with a stand of 41 runs before Maxwell was picked up by Tye for 25 off 21 balls. Mackenzie Harvey hung around with his captain but Qadir sent him back for 22.

Handscomb was the sixth wicket to fall handing Tye his second wicket of the day for 57 as Victoria slumped to 148 for six. However, late-order resistance by wicketkeeper batsman Seb Gotch (43 off 65) helped Victoria to 200. Qadir finished with 10-1-50-3 while Tye had figures of 9-0-47-3. D Arcy Short claimed two for 21 with his part-time left-arm wrist spin.

In reply, Philippe and fellow opener Josh Inglis provided a breezy start and Western Australia raced to 90 in 11 overs. Inglis was the aggressor scoring 42 off 27 balls before falling to 18-year-old leg spinner Tom O onnell.

Victoria then made a short comeback with the wickets of Philippe, Short (23) and skipper Ashton Turner (18), before Stoinis big hitting, consisting three fours and four sixes as WA overhauled the target with 129 balls to spare and six wickets in hand. 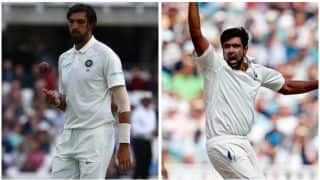