Joe Dawes is under a lot of fire for his team's lean patch with the ball in the Tests.

Indian bowling coach Joe Dawes is under a lot of fire these days for his team’s misfortunes during the recent Tests, though he has found support in the form of former Marylebone Cricket Club (MCC) team mate Michael Jeh, who believes that he still is the best man for the job.

“I played cricket with him at Valleys CC in Brisbane as he made his way into first-class cricket. Unbelievably he is a hard-working cricketer. Very tough man, very strong disciplinarian,” Jeh was quoted as saying to Lahore Times.

Jeh wasn’t done praising the ruggedly-built former Queensland bowler. “He was never a child protégé so he understands what it is like to work hard to get his success. That should be the great legacy he leaves India – there is no substitute for hard work,” added Jeh.

The 43 year-old however, was skeptical about his future in the role. “I am not sure what my future holds. The BCCI [Board of Control for Cricket in India] is not allowing me to speak to the Indian reporters till then,” said Dawes, who awaits the Board’s verdict on his future after the tour. 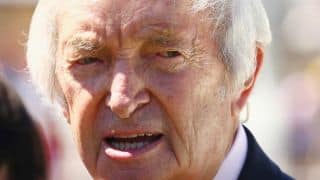 Richie Benaud could do commentary from home