Allrounder Joe Denly has been named the Players' Player of the Year at the Professional Cricketers Association awards in London.

Allrounder Joe Denly has been named the Players’ Player of the Year at the Professional Cricketers Association awards in London. Denly received a maiden Test callup for England for the Sri Lanka tour following an outstanding domestic season for Kent.

Pacer James Anderson, who recently surpassed Glenn McGrath as Test cricket’s most prolific fast bowler, was named Test player of the Summer. Surrey’s Ollie Pope, who made his Test debut against India in August, won the Young Player of the Year award.

The 32-year-old Denly was nominated for the award alongside teammate Matt Henry, Rory Burns (Surrey) and Rikki Clarke (Surrey).

Denly scored 1729 runs, took 57 wickets and became the first player in T20 history to score a century and claim a hat-trick in the same match. “Playing against fantastic cricketers throughout the years and being recognised for your contribution to your team, and what you achieved in that year is something very special and to be proud of,” Denly said. “The last couple of years is about enjoying cricket and having a good understanding of what works for me and what doesn’t, and really sticking to that and enjoying that.” 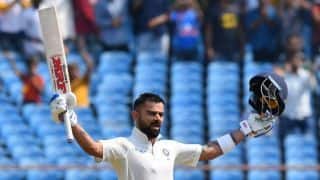