England captain Joe Root was proud of the way his side had come though periods of adversity after completing a 3-1 series win over South Africa at Old Trafford on Monday. The Yorkshireman’s first series as England captain ended with a convincing 177-run victory in the fourth Test at Old Trafford. South Africa, set a mammoth 380 to win, were bowled out for 202 shortly after tea on the fourth day. Moeen Ali ended the match with two wickets in two balls, having finished off England’s 239-run third Test win at The Oval with a hat-trick.

Monday saw off-spinner Moeen finish with innings figures of five for 69 to cap a brilliant series where he took 25 wickets in total and scored 252 runs. Several ex-England captains criticised Root’s men for a lack of application after South Africa levelled the series at 1-1 with a huge 340-run win in the second Test at Trent Bridge.

“I am really pleased with the way the series has gone,” Root told Sky Sports after England completed back-to-back series wins over South Africa for the first time since 1964.

“Credit to South Africa, they put us under pressure a number of times throughout but the way our guys have responded has been exceptional,” the star batsman added. “We have had to overcome a number of different challenges, but the way we have played as a unit, especially the last two games, we have been brilliant.”

Concerns remain over England’s top order batting, a problem the selectors will look to address in an upcoming three-Test series at home to the West Indies that precedes an Ashes defence in Australia later this year.

“We have got a lot of hard work to do in the future but it was a great series. It has been a fantastic team performance and that’s what it takes to win a series like this, everybody contributing and that’s what we have had this time around,” added Root.

South Africa checked England’s progress with a fourth-wicket stand of 123 between Hashim Amla (83) and skipper Faf du Plessis (61). But Moeen then took three wickets for five runs in 11 balls, including the prize scalp of Amla, shortly before tea and there was no way back for South Africa.

It was the end of a lengthy and unsuccessful tour for the Proteas.

They were also beaten by England in one-day international and Twenty20 series and suffered a hugely disappointing first-round exit in the Champions Trophy ODI tournament as well.

“England were well deserved winners of this series, they were consistently the better team,” said du Plessis. “Three months in England has been a tough time for us. At times we showed some real good fight but consistently England were just coming up with answers. The quality of the English bowling was superb this series, they were relentless. As a batting unit we felt we could never get on top of them and from a runs point of view we felt we didn’t do ourselves any justice.”

Moeen took 10 wickets in England’s 211-run win in the first Test at Lord’s and never looked back.

“I feel like I got into a good rhythm after that. I have done a lot of work and I have had a lot of consistency this series,” said Moeen. Faf du Plessis: If AB de Villiers comes back it's a bonus; but I don't expect it 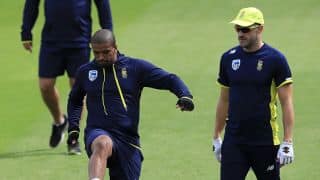