New Zealand had declared their first innings on 427 for eight, with Henry Nicholls unbeaten on 145 to show the pitch held no demons.

New Zealand snapped up three wickets on Sunday, including that of England skipper Joe Root with the last ball of the day, to pin down an England side battling to salvage a draw from the first Test.

At stumps England were 132 for three, trailing by another 237 runs at the start of the final day of the Auckland Test.

Danger man Root was on 51, his 38th half-century in Tests, when he was smacked on te right index finger by a flyer from Trent Boult in the last over.

After medical treatment he shaped up to face the last ball of the day and was caught behind by wicketkeeper BJ Watling.

New Zealand had declared their first innings on 427 for eight, with Henry Nicholls unbeaten on 145 to show the pitch held no demons. But England were in immediate trouble as they faced a target of 369 to avoid an innings defeat.

The timing of the declaration gave the hosts 50 minutes to bowl at England before dinner in the day-night Test and then have another crack in the twilight-to-dark period.

The innings was only into its third over when Trent Boult had Alastair Cook caught down the leg side by Watling for two.

But the devastating swing bowling from Boult and Tim Southee that saw England crumble for 58 in the first innings lost its zing quickly in the second.

Instead, it was Neil Wagner with his barrage of bouncers in the final session who struck next.

Mark Stoneman and Root, having ridden their luck as they played and missed through the early overs, found the footwork that had deserted them in the first innings and put on 88 for the second wicket.

But Wagner, not required to bowl in the first innings when Boult and Tim Southee did all the damage, broke the partnership with a new style of delivery. Two short balls to Stoneman were pulled for a four and a six to get him to 55. Then Wagner changed his angle, put more into the next delivery so it rose higher and saw the ball top-edged to Boult at fine leg.

That left England on 94 for two, with Root and Dawid Malan adding 38 before Root’s dismissal.

Despite England’s first innings collapse, Nicholls rarely seemed under pressure when he posted his 145, his second Test century, before the declaration.

He and Kane Williamson with 102 laid the foundations for New Zealand’s crushing lead despite rain interruptions which reduced days two and three to a total of 25 overs.

After resuming Sunday on 233 for four in sunshine, New Zealand added 194 for the loss of four more wickets.

Watling went for 31, caught behind off Stuart Broad who also bowled Todd Astle for 18.

Colin de Grandhomme was caught behind off Craig Overton after scoring a quick 29 and Southee was caught and bowled by Root for 25.

Broad, who dismissed Tom Latham to get into the 400-wicket club, ended with three for 78 and James Anderson took three for 87. 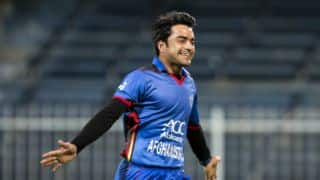 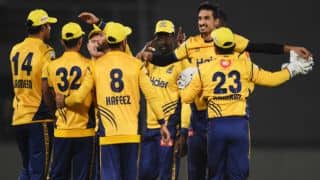