Joe Root says he will be refreshed rather than fatigued by playing a full part in England's one-day international campaign against the West Indies.

Manchester: Joe Root says he will be refreshed rather than fatigued by playing a full part in England‘s one-day international campaign against the West Indies even with the Ashes tour looming. Root’s first away series as Test captain will be the defence of the Ashes in Australia, starting in Brisbane in late November. But although he has now overseen home series wins over South Africa (3-1) and West Indies (2-1) in his first season as Test skipper, the star batsman an England regular in all three international formats has no interest in taking a break just yet. He chipped in with 54 vital runs as England beat West Indies by seven wickets in the first of the five-match ODI series in Manchester on Tuesday. FULL CRICKET SCORECARD: England vs West Indies 2017 – 2nd ODI at Trent Bridge

Together with Yorkshire team-mate Jonny Bairstow, whose 100 not out was his maiden ODI century, Root put on 125 for the second wicket as England made light work of chasing down a modest target of 205. “I feel good . We had a chat before the series and said ‘do I feel like I can play?’,” said Root, who returns to the ranks in white-ball [limited-overs] internationals, with Eoin Morgan captaining England.

“Every time I feel fit and that I can deliver at my best I’ll go out and play for England,” said Root. “I love the opportunity we get every time we put on the shirt. It’s such a proud feeling and I’ve never lost that from the start,” the 26-year-old added. And with Root, an occasional off-spinner, able to leave captaincy duties to Morgan in the 50-over game, the Test skipper said the change in formats is almost as good for him as the actual match break given to the likes of star all-rounder Ben Stokes, rested from last weekend’s Twenty20 loss to the West Indies. Will WI move on from ‘lost opportunity’ and compete in remaining games?

“As players, you know yourself better than anyone else and in the best interests of this and the Test team you need to be really honest,” said Root. “Only you really know if you are struggling or tired. “I think a change in formats is almost a little break in itself. You think about different things, you approach training differently and you are having a break from red-ball [Test] cricket.”

Root hailed the century made by Bairstow, with the Test wicketkeeper for so long on the fringes of the ODI side now on the verge of establishing himself as a specialist 50-over opener.”The best thing about Jonny is that he can bat anywhere in the top six,” said Root. “He has a great game, a brilliant power game where he can be destructive at the backend or the Powerplay up front and he also rotates the strike very well.” West Indies need Gayle in limited-overs cricket, believes Nasser Hussain

The one disappointment for Root on Tuesday was when he dropped Chris Gayle in the slips when the West Indies dangerman was on nought. Root, however, made amends when he held a brilliant running catch over his shoulder to get Gayle for 37 after the big-hitting opener skied Chris Woakes. “I saw it the whole way [the dropped chance],” said Root ahead of Thursday’s second ODI at Trent Bridge. “I thought it could be quite costly, and when the second one went up I thought ‘I have to get there’ a huge amount of relief when I managed to cling on to it.” 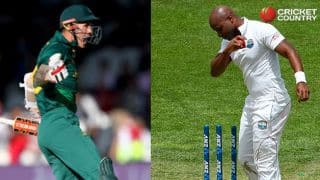