Alastair Cook, who has led England in record 59 Tests, will have a new-year meeting with England and Wales Cricket Board (ECB) director Andrew Strauss on his role in future.

England assistant coach Paul Farbrace feels that there is no guarantee that Joe Root— who is expected to replace under-fire Test skipper Alastair Cook—will be an instant hit in the job. Cook has coming in the firing range following the recent five- Test series defeat against India. A dramatic draw in the opening match, followed by four straight defeats in the Test series, led to suggestions that the left-handed opener might decide to step down from the role. However, Farbrace, who worked with Root at Yorkshire, believes that any talk about the latter s suitability involves a touch of crystal-ball gazing .

A lot has been made about Joe Root being ready and there s been comments made by Cookie and Trevor [Bayliss, England’s head coach] saying, Rooty is ready to be the next captain. I don t think that anybody who takes over as captain of England you can ever really know whether they re ready to do the job or not. It s a huge job a job that everybody in England thinks they can do better , stated Farbrace.

The assistant coach further asserted that the current England vice-captain has not had a had a great deal of captaincy experience.

“Until he actually does the job, no one s going to know. It s crystal-ball gazing, isn t it? Farbrace said.

The 31-year-old, who has led England in record 59 Tests, will have a new-year meeting with England and Wales Cricket Board (ECB) director Andrew Strauss.

Everyone is behind him being leader of this team, stated Fabrance after their mauling in the hands of India in the last Test at Chepauk. Although England were seriously duffed up in India, their faults were evident at home as well where they gave up a 2-1 lead over Pakistan in the summer to draw the series 2-2. England have also dropped to the No. 5 spot in ICC Test rankings with Virat Kohli-led side still on top. 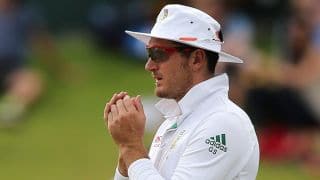