Giles mentioned that although the bowler is in radar, he will need to discuss the topic with other members of the management panel.

Ashely Giles, the newly-appointed managing director of England cricket believes fast bowler Jofra Archer has a chance of representing England in the World Cup. The Barbados-born Archer, who holds a British passport and plays for Sussex since 2016, was serving ECB s previous seven-year residency rule which effectively meant that he would be available to England in 2022, by which he would have been 27. (READ: Ashley Giles back to ‘pinnacle’ England post)

And while the prospect of representing Archer excites Archer, he is not losing sleep over it. Giles mentioned that although the bowler is in radar, he will need to discuss the topic with other members of the management panel, in particular, national selector Ed Smith. Even captain Eoin Morgan wasn’t too confident of assuring Archer a place considering how settled the squad is shaping out to be.

“He is an exciting cricketer and his hat will be in the ring,” Giles said. “It will be exciting when Jofra is available. Any guys who bowl 90mph-plus are going to create interest and get people out of their seats. His skills are good, and it is a massive one-day year. He will be available from the end of March.”

Currently playing the Big Bash League, Archer has picked up seven wickets in six matches for the Hobart Hurricanes. And just how much of a case Archer is able to present for himself remains to be seen considering how well balanced the current England limited-overs set-up is. In fact, Morgan had earlier stated that if needed, he will drop himself, such is the solidity England have in their line-up.

“We’ve got a group of players who’ve done a lot to get us to this point and have performed very well for England,” Giles said. “So competition for those final places is going to be strong.

“I’ll have to speak to Ed. I’ve not spent much time with him although we spoke through the summer as a director of cricket of a county [while Giles was at Warwickshire]. I’ll need to get some other opinions as well. I need to know what the coaches are thinking and the captains. It is a big year and it would be a bit tough on the lad to think he is going to be some sort of messiah coming into the team. But he is an exciting cricketer.”

Giles revealed that he plans on visiting the Caribbean and then India to keep a keen eye on the players during England’s tour of West Indies and Lions’ tour of India.

“I’ll be going out for second Test in Antigua and some of the one-dayers,” he said. “It is not about me just watching some cricket: I need to get to know some of these guys. Before we know it, we will be into the season, so I need some time with them. I have a long list of people I need to catch-up with and a long list of stuff I need to read.” 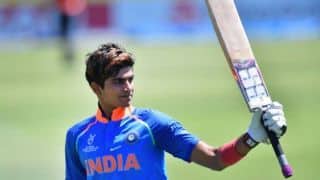