The Barbados-born Archer is all set to make his England debut next month against Pakistan. Owing to his performances in the various T20 leagues, there have been calls for the right-arm fast bowler to be included in England’s World Cup squad.

Currently, Archer is representing RR in the ongoing Indian Premier League where he has taken seven wickets in as many matches so far.

“Jofra makes any team better,” Stokes said on The Doosra podcast. “He is the most naturally gifted bowler I ve seen and I don t think he realises how good he is. Some of the things he can do at the click of a finger are just wow it s pretty special to watch. You ask him to do something and he nails it straight away.”

Archer’s emergence adds to the already talented pool of fast bowlers England boast of as they host the quadrennial event and are tipped as the favourites alongside India to win the tournament.

“To have somebody at the pace he bowls and the skills he has the selectors are going to be scratching their heads and it s a great time to be an England fan and an England player,” the 27-year-old said.

However, he skirted the question of whether Archer should make the cut for the World Cup. “It’s a tough question. But it s a great position to be in as an England team when you ve got a player with the skill level Jofra s got,” he said.

He added, “The one-day team has been playing some good cricket for the last three years and we have got ourselves to number one in the world, which was one of the targets of the side. The favourites tag doesn t mean anything but it should give us confidence for what should be a memorable summer of cricket.” 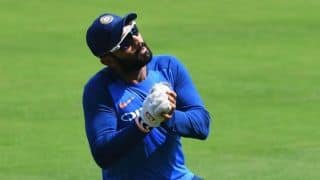