The laborious Joginder Sharma took the limelight with a five-for while Sunny Singh led a spirited batting effort as Haryana staged a remarkable fight-back to leave their Ranji Trophy opener against defending champions Mumbai evenly poised at Lahli on Monday. 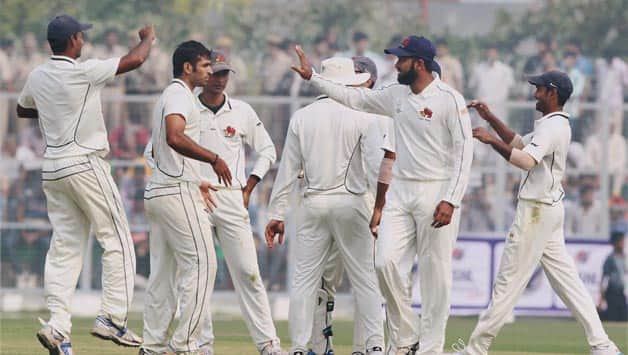 Mumbai were kept at bay by the Haryana batsmen, until Zaheer Khan and Vishal Dabholkar got them back into the game with quick wickets © PTI

The laborious Joginder Sharma took the limelight with a five-for while Sunny Singh led a spirited batting effort as Haryana staged a remarkable fight-back to leave their Ranji Trophy opener against defending champions Mumbai evenly poised at Lahli on Monday.

Seeking to make a comeback into the Indian team, Mumbai captain Zaheer Khan picked up four wickets, including two at the fag end of the second day’s play, to leave Haryana at 224 for nine when stumps were drawn.

The hosts, thus, gained an invaluable overall lead of 222 runs, having bowled out Mumbai for 136 in their first innings.

Haryana had scored 134 in their first essay.

Haryana rode on Joginder’s inspiring spell of five for 16 and then 26-year-old Sunny led the way with a 63-run knock to frustrate the visitors before Zaheer got into the act.

Left-arm spinner Vishal Dabholkar picked up three wickets for Mumbai but he would be disappointed at being hit for two sixes and a four by Harshal Patel in the day’s penultimate over.

Resuming at overnight 100 for four, Mumbai lasted less than two hours before being bowled out for 136 for a slender two-run lead in their first innings.

Given that 30 wickets tumbled in two days, it would not be easy for Mumbai to chase whatever Haryana set from hereon on this sporting wicket. But the 40-time champions’ have a good batting line-up to chase down the target.

Considering Mumbai’s depth in batting, Haryana’s last pair would like to add as many runs as they can to their total tomorrow.

Starting the day on 44, Ajinkya Rahane added seven runs before being trapped in front by Joginder barely five overs into the day’s play.

Rahane’s 108-ball 51 included nine hit to the fence, and it was his wicket that opened the floodgates.
Wicketkeeper-batsman Aditya Tare was out next ball, caught in the slips by Sachin Rana.

Using the lively pitch and helpful conditions to good effect, Joginder soon had Hiken Shah as he induced an edge for keeper Nitin Saini to complete an easy catch.

The 30-year-old Joginder, remembered for his last-over exploits in the final of the inaugural Twenty20 World Cup in 2007, was not done yet as he sent back Javed Khan to leave Mumbai reeling at 118 for seven and in danger of conceding the first-innings lead.

Sent in as night-watchman last evening, Dhawal Kulkarni put up a stiff resistance scoring 25 useful runs, and, which though, may not prove to be too significant in the context of the match, helped Mumbai overtake Haryana’s first-innings total by just two runs.

There were two wickets apiece for Harshal Patel and Mohit Sharma while Ashish Hooda had removed Kaustabh Pawar on Day 1.

Their morale boosted after an impressive bowling effort, Haryana started their second innings on a confident note with Sunny Singh and Rahul Dewan adding 85 runs for the second wicket, putting their team in a position of strength.

The more flamboyant of the two, Sunny found the fence with considerable ease, and hit Zaheer Khan for three fours in one particular over.

The Mumbai captain, seeking to make a comeback into the Indian team, was clearly not too pleased with the treatment.

First a length delivery was driven through the cover; he then cut a short and wide one on the off through point before placing one to perfection in the gap between extra-cover and mid-off.

Zaheer and his bowlers were guilty of bowling short on a number of occasions.
The visitors heaved a sigh of relief after Kulkarni clean bowled Sunny for a well-made 63 that came off 78 balls and included 11 boundaries. Zaheer had Abhimanyu Khod caught at gully by Vishal Dabholkar.

From 22 for one at lunch, Haryana were sitting pretty at 132 for three at the tea break.

Having added 40 runs for the fourth wicket with Jayant Yadav, Dewan, six short of fifty, fell to left-arm spinner Dabholkar with the score reading 153 for four. The 27-year-old batsman faced 121 balls and struck four boundaries.

After being hit for a massive six by Rana, Dabholkar came back strongly to win an lbw appeal against the batsman, only to be carted around by Patel towards the end.

Skipper Ajay Jadeja did not trouble the scorers as he was caught by Rahane off Zaheer for nought.

On this track, bowlers were needed to pitch it up, and whenever they did that, the Haryana batsmen were in trouble.