John Bracewell has been associated with Ireland after ICC World Cup 2015 and also been part of the team when they acquired the Test status recently.

John Bracewell will bid adieu as Ireland coach once his contract expires in December. Bracewell is in no mood to extend his contract. He has been with the side after ICC World Cup 2015 and has been part of Ireland s success across formats. He was also part of the team when they acquired the Test status along with Afghanistan recently. However, he does not wish to continue to remain a coach now that Ireland has gained the Test status. Bracewell was associated with New Zealand cricket for five years, earlier. It is also unsure if he wishes to extend his services for New Zealand again. Ireland may have to wait until 2019 for their maiden Test

On stepping down, Bracewell issued a brief statement, Having been down the full-on full member road before with New Zealand Cricket, it is not my desire to do so again. Whilst my wife and I have immersed ourselves into Ireland and Irish culture we feel it is now time to return home to New Zealand and our families. I have therefore agreed with Cricket Ireland to finish up at the conclusion of my contract. I have loved working with an honest group of players whose values and work ethic have been second to none.

As challenging as the future may be, they will be the first to honour the Test cap and I am proud to have spent some time with them on that journey, the statement further stated as mentioned on cricketireland.ie.

However, Bracewell is delighted on Ireland gaining the Test status and helping the youngsters in the right direction. I took on the role as head coach because I believed in the little guy getting a fair break and the cause of attaining Test status appealed to my underdog psyche. Before my departure there is still a mountain of things to be put in place in assisting Richard Holdsworth and the coaching staff in preparing the Irish players for this new, exciting and very tough future, added Bracewell.

Bracewell was the coach of New Zealand until 2008. He then returned to Gloucestershire for a second stint. 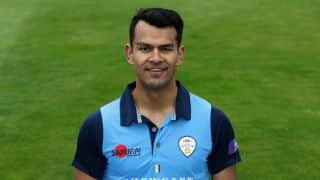