Australian chairman of selector John Inverarity has revealed that even though Alex Doolan has been omitted in favour of Phil Hughes and Shaun Marsh for a Cricket Australia (CA) contract, he is still the preferred option for the No 3 batting spot.

Inverarity, who is uncertain whether he will continue after his contract expires in June, revealed Test incumbent Doolan was pipped by Hughes and Marsh for the 18-man contract list because they had a superior ranking in 50-over cricket.

According to News.com.au, Doolan, who is seen as more of a Test match specialist, is poised to be in Australia’s next Test team against Pakistan in October while Hughes is again likely to be trapped on the sidelines and may have to wait until veteran Chris Rogers retires before his chance comes again.

Strongly indicating that Doolan would hold his place at No 3, Inverarity said that Doolan is very highly regarded by the national selection panel as he is their incumbent No 3. He also added that Doolan has received a lot of encouragement and opportunity as a standby for Shane Watson in the New Year’s Ashes Test in Sydney.

Inverarity also said that Doolan has played all three Ashes Tests at No 3 and anticipated a good future and an upgrade for him.

The list, which is updated annually, was cut back from 20 to 18 and takes into account form in Tests, One-Day Internationals (ODIs) and T20I matches, with the minimum retainer for players named on the original contract list being 250,000 dollars, the report added. 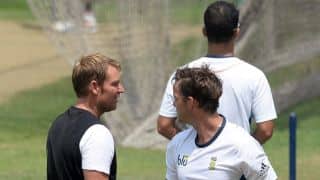