Jonathan Carter's sparkling knock of 133 helped West Indies A post a formidable total of 279 for the loss of six wickets in the second unofficial ODI at Bangalore. 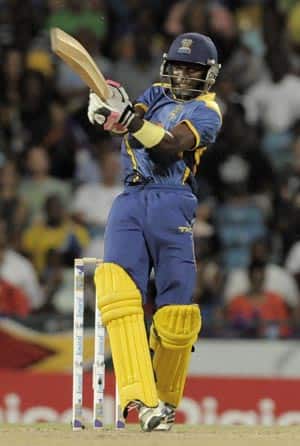 Jonathan Carter’s sparkling knock of 133 helped West Indies A post a formidable total of 279 for the loss of six wickets in the second unofficial ODI at Bangalore.

On Tuesday morning, there were no worries of rains as Yuvraj Singh won the toss and put the opposition into bat. A unique feature of Indian team’s recent success is the consistency of the bowlers and the fresh set of pacers too have been impressive for the Under-23 and A teams. Against Windies, left-arm bowler Jaydev Unadkat and Sumit Narwal tested the batsman with a probing length. In his first spell, Narwal bowled two maidens keeping the opposition on the leash. After Unadkat’s two overs, Yuvraj replaced the left-armer with R Vinay Kumar. The pacer bowled a probing length and quickly reaped rewards by getting Kieran Powell to nick one to wicketkeeper Naman Ojha.

With a disciplined attack from the pacers, the runs had dried down considerably when Kumar struck once more dismissing Andre Fletcher. The batsman after gaining some confidence with a few boundaries charged down the wicket against Kumar. The bowler though used all his T20 skills to pitch it short and Fletcher struggled to keep up to his aggressive position only managing to nick it to Ojha.

Apart from Kirk Edwards, onslaught against Kumar in his next over where he hit him for three boundaries, the batsman along with new man Jonathan Carter presented a cautious approach. Half way through the innings, the batsmen had got their eye in scoring comfortably. Yusuf Pathan in particular went for some runs. However, the aggressive intent cost Edwards his wicket scoring 36 runs. After hitting a six, he went for one more and was foxed by Pathan ending up being stumped by Ojha. New man Andre Russell too perished with a similar intent like Edwards hitting for two sixes and then top-edged to hand a simple catch.

At 112 for four, Indians had clawed back to take control of the game. But another fine partnership between Jonathan Carter and Leon Johnson set the momentum for the team. Unlike the previous batsmen, the duo scored at a brisk rate and took the odd chances to up the ante.

Carter soon launched a calculated onslaught going after the bowling while Johnson remained steady on the other end. The highlight of Carter’s aggression was that he kept the bowlers guessing. In one over, he hit Narwal for a six over long on and two deliveries later he muscled a straight drive. In the next over, he lofted Unadkat over the covers and in the same over he earned a boundary past square leg. It was an entertaining innings which could have reminded skipper Yuvraj of his own exploits in the previous match.

Carter and Johnson’s partnership was finally broken by Vinay Kumar in the 46th over as Johnson tried to hit an expansive shot and was caught in the deep. The 131-run stand had given Windies the much needed boost after the initial hiccups.

Carter was finally dismissed by Unadkat to a full-length delivery and was adjudged leg before. His sparkling innings of 133 from 132 balls included 18 boundaries and three hits over the fence. Going by the might of batting in the Indian ranks, 280 is a good target.

Shikhar Dhawan's Sunrisers Hyderabad would bank on their formidable bowling

Ravichandran Ashwin: India’s premier off-spinner following in the footsteps of Prasanna and Venkataraghavan