Despite given the go-ahead, Trott is unsure of representing England again.

Jonathan Trott, who suffered from stress-related illness, was cleared by England’s medical team for selection on Saturday. Trott’s international career has been on hold since he returned midway through England’s 5-0 Ashes defeat in Australia last November because of the aformentioned illness. The batsman made a first-class comeback earlier this year, at the start of the current season for Warwickshire before being forced to take another break after suffering a recurrence of the problem. The South Africa-born batsman returned for a second time in June and, after making runs in the Bears’ second XI, Trott is finding form in the first team.

On Saturday, Trott was quoted by the Birmingham Post, “There are similar cases [to mine] in cricket and that is why we have the PCA and that is why I am having the PCA Benevolent Fund as one of my charities. The fund is there to help people pick themselves up, it’s a fantastic thing.”

“I have spoken to a few players who have said they have gone through a similar phase in their lives and didn’t tell anyone, I am talking about international cricketers.”

“I have got no regrets about the way my career has gone. I do not know if I will ever play for England again — I was disappointed with the way it finished, but I have certainly got a lot to be proud of.”

“The two things for me is that I am happy to be back playing for Warwickshire and am feeling good and keen to continue to contribute to the team in the final few weeks of the season.

“It was a difficult time at the beginning of the year and the end of last year. To be honest, I was struggling for a long time before I said anything. It is another experience I hope to be able to help people learn from and be aware of.”

“I can look back at my career with Warwickshire and England, and there are no regrets in that regard. Warwickshire has a vast history, and history and success go hand in hand. There are a lot of other counties who are not spoken about as highly as Warwickshire. I have not put a time-frame on it [retirement]. I will spend the rest of my career at Warwickshire. I am enjoying it at the moment,” he concluded. 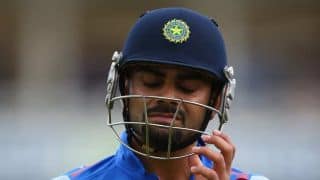