England batsman Jonathan Trott said that the visitors are determined to level the four-match series against India in the second Test in Mumbai starting Friday after losing the opener by nine wickets in Ahmedabad. 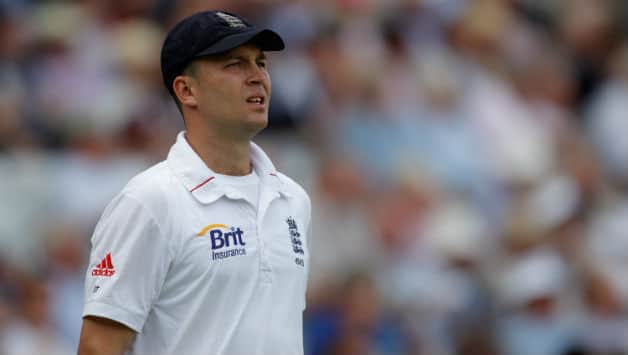 England batsman Jonathan Trott said that the visitors are determined to level the four-match series against India in the second Test in Mumbai starting Friday after losing the opener by nine wickets in Ahmedabad.

“I think it will be good to strike early and go to Kolkata 1-1. It is very important that we have that mindset. I think the conditions are bit different here but it will work in both the teams’ favour with regards to bounce and turn.

Touring India is fine but playing good cricket is more important,” he told reporters at Mumbai.

“We need to produce on the field. We are looking forward to Friday. It is a fantastic opportunity for us to get 1-1,” the South Africa-born English cricketer added.

Asked about the pitch on offer at the Wankhede Stadium for the second Test, Trott said, “I did have a look at the pitch. It looks a bit similar to the net wicket. It was turning a bit. When you come here, the red soil tends to spin a bit more and you generally get more spin in Mumbai.

“The ball is coming on fine. There is a little more bounce. Ahmedabad was low and slow, but here you will find bounce a bit more. Hopefully, our seamers can exploit that.”

Trott’s assessment of the pitch is different from what India captain Mahendra Singh Dhoni had expected.

After winning the first Test against England at Ahmedabad, Dhoni had expressed his displeasure at the Motera wicket and said that he wanted rank turners for the remainder of the series.

Trott praised young India batsman Cheteshwar Pujara for his unbeaten 206 in the first innings in Ahmedabad and said such knocks help a side to win matches.

“We saw Pujara get a good double hundred and that is what wins you Test matches. If we had managed to get an extra 100 runs in the first innings and Alastair (Cook) playing in the same way (he did in the second innings), it would have been a different game. There are a lot of ifs, but (the) crux of the matter is that we are 0-1 down and we need to play a lot better on Friday,” he said.

After the second Test in Mumbai, there will be a gap of eight days before the next match in Kolkata.

When asked about the week-long gap between the Mumbai and Kolkata games, Trott said, “You don’t want to mull over these things. You want to get back to the game and get back to the middle and crack on. Hopefully, travelling to Kolkata 1-1 will be great. It will be a huge challenge, but this team has got used to such challenges in the last couple of years.”

On England batsmen’s inability to play against quality spin attacks on sub-continent pitches, Trott said, “I still think we are improving. I think it gets highlighted because generally, here, you face spinners and they are going to take a lot more wickets. It’s an emphasis of trusting your game and producing results.”

“We saw Cookie (captain Alastair Cook), the way he set up his game against spinners, it is effective. You don’t have to play a certain way. You just have to get the basics right and as long as you do it well and succeed, no one really worries how you do it.”

He admitted that the team needs to pull up its socks if they wish to level the series here.

“There is a great challenge ahead. We have some hard work ahead of us,” Trott said.

“So, there is no reason why we can’t. We need to put a good game together with the ball and bat. It’s not about playing spin bowlers, it’s about putting in five good days together,” Trott added.

On his own form, Trott said, “Form goes up and down. It is a frustrating thing in cricket. There is no guarantee in life and cricket.”

“We had good individual performances, but didn’t play well as a team. We had opportunities to put India under pressure, but it didn’t happen.”

In the Ahmedabad Test, Trott scored 0 and 17 in two innings and the English batsman wants to prove himself in the remainder of the series.

“I was ambitious coming to the Test tour of India and I want to make the most of it. There are three more matches left, so I am looking forward to it,” he said.

He added that the team has been successful in the last couple of years and will have to readjust its goal for the tough Indian series.

We understand the challenge that lies ahead of us in the next three games,” Trott said.

Abul Hasan's century on debut revives Bangladesh on Day One