Bairstow stepping up to score a 99 was the paving stone to England s confidence; Anderson s spell was the cherry-topping.

On the opening day, England had collapsed to 260 for 6. Though it was not a paltry score, it had very slim chances of England taking a first-innings lead in the fourth Test. But then, Jonny Bairstow had not batted, James Anderson had not bowled. The two, in a dramatic turn on the second day, changed the course of the game, putting the hosts in the driver s seat one with a magnificent 99 and the other with a 4-wicket haul that ripped the Proteas’ batting apart, reducing them to 220 for 9 for at stumps.

This is not the first time Jonny Bairstow has done something like this. Reason why England have been depending upon the red-haired wicketkeeper-batsman is the way he can handle pressure, play his shots as well as regulate how the tail-enders would bat with him. Bairstow, stepping up to score a 99, was the paving stone to England s confidence. Meanwhile, Anderson s spell was the cherry-topping.

Batting with Bairstow, the tail had just one job to do, that is, rotate strike. Bairstow took up the pressure of finding gap, remembering them, looking for the opportunities and placing the ball in the gaps all on his shoulders. Batting with him, even Anderson developed commendable defense. It seemed like everyone present at the Manchester ground wanted Bairstow to get to the century after the innings he had built run-by-run with his toil. But Keshav Maharaj got him plumb, and even the review could not save him from getting out for 99.

England had 362 on the board, certainly more than what Joe Root might have expected. All of South Africa s hard work on the first day had fallen apart for wayward game-plan and inability to cope with Bairstow s run-fest. However, getting the lead still was not an easy task for England.

James Anderson got ready for his run-up, from the James Anderson end. While the crowd cheered him to get a wicket off the first ball, he did it on his third, removing an in-form Dean Elgar. The ball got him plumb and Elgar himself was so sure of it that he refused to review.

The other opener, Heino Kuhn, along with Hashim Amla, kept things going till lunch. But just when it looked like South Africa were on the right path, Amla was sent back by Toby Roland-Jones, who appears to be a thorn to him, dismissing him three times in the series now.

At this point, South Africa had a few brief partnerships forming, but none of them was converted into a big one. South Africa lost 3 wickets by the end of second session, putting up 93 runs on the board.

The third session entirely belonged to England bowlers and South Africa had no clue about how to cope with them. Bavuma, who was looking good to get his ninth Test half-century, was denied of the same by 4 runs. Once South Africa lost the set Bavuma, others gave in to the movement produced by the duo of Anderson and Stuart Broad. They together got four wickets post tea, Anderson getting three of them. South Africa s latest Mr dependable down the order, Keshav Maharaj, too gave away his wicket for 13 to Moeen Ali.

With the likes of Elgar, Faf du Plessis and Quinton de Kock gone without much contribution, the responsibility of saving a drowning South Africa came upon the shoulders of Kagiso Rabada, who is a better batsman than Morne Morkel or Dwayne Olivier. Rabada played a quickfire knock, full of powerful shots. However, he was also removed off the last ball of the innings, as Ben Stokes took a brilliant low catch at gully, diving to his left with one hand. South Africa are now left with just one wicket, with Mornie Morkel (18*) to bat with Duanne Olivier. 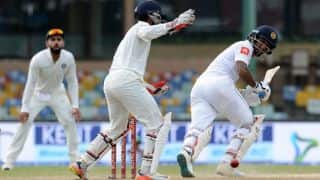