Apart from Mark Wood and Jonny Bairstow there was little to enthuse about with the England batting as Trent Boult and Tim Southee swung and seamed the ball with precision.

Jonny Bairstow was in sight of his fifth Test century after a late run spree with Mark Wood lifted England to 290 for eight at stumps on Day One of the second Test in Christchurch on Friday.

Tim Southee and Trent Boult did all the damage for New Zealand with Southee taking five for 60, his seventh five-wicket bag while Trent Boult had three for 79 after New Zealand won the toss and elected to bowl first.

England were in danger of not reaching 200 until Wood joined Bairstow and the pair put on 95 for the eighth wicket before Wood fell to Southee for 52, his maiden Test half century.

After being comprehensively beaten in the first Test, England strengthened their batting line up for Christchurch with the addition of James Vince while Wood and Jack Leach came in for bowlers Chris Woakes, Craig Overton and Moeen Ali.

But apart from Wood and Bairstow there was little to enthuse about with the England batting as Boult and Southee swung and seamed the ball with precision.

Bairstow’s 97 off 154 balls included partnerships of 56 with Ben Stokes, 13 with Stuart Broad, the sparkling 95 with Wood and 41 with Jack Leach who was not out 10 at the end of the day.

On 58, Bairstow suffered a fearful blow to the side of the head from Colin de Grandhomme which knocked his helmet from his head but did nothing to slow his run flow.

Boult and Southee took their wickets in clumps starting with Alastair Cook (two) and James Vince (18) to have England at two for 38.

When play resumed after lunch they accounted for Joe Root (37), Dawid Malan (duck) and Mark Stoneman (35) in a nine-ball burst.

Following the tea break, Stokes went for 25 and Broad for five before the Bairstow and Wood partnership. 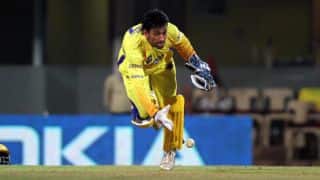