Jos Buttler believes not worrying about the colour of the ball helps him.

The new trend in England cricket is giving up one format and trying to be master in another. Alex Hales and Adil Rashid have fallen prey to it. Jos Buttler, however, likes to keep it simple. For him, a ball is a ball and the colour of it does not worry him. Buttler has taken great strides in white-ball cricket but hasn’t been able to replicate the same consistency in international cricket with the red ball. However, his Test comeback has been impressive. He followed his fine 67 at Lord’s with a match-defining 80* at Leeds. Buttler, a limited-overs giant, made his last First-Class hundred in January 2014. He hadn’t played a red-ball game in 2018. The selectors still backed him and it played dividends.

Buttler credits his stint with Rajasthan Royals (RR) in IPL 2018 for his Test comeback. He came close to score a record six consecutive half centuries in his final six innings of IPL. On the sixth, he got out for 39.

“Those couple of weeks in the IPL gave me huge amounts of confidence,” Buttler was quoted by ESPNCricinfo. “To be in those pressure situations in India, playing in front of crowds, the pressure of being an overseas player. That showed me a lot about where I was at and where I can get to, so that gave me a lot of confidence. For me, not trying to worry about the colour of the ball definitely helps. Having put in good performances elsewhere and not putting as much pressure on myself.

“In T20 there’s generally another game soon after, so you know you’ve got another opportunity coming up. You probably just move on if you fail. But in Test cricket, if you get out early, you have a long time to think about it.”

Buttler scored a fine 85 on his Test debut against India at Manchester in 2014. With England in middle of troubled times in Test cricket, Buttler will be expected to continue his form against the visiting Indians later this year. 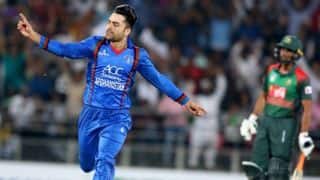 Why Rashid Khan considers himself ‘a finger spinner’