"There are not too many better in the world at the minute," said Trevor Bayliss of Jos Buttler.

Trevor Bayliss has backed long-time assistant Paul Farbrace to succeed him as England coach when he stands down after next year’s World Cup and Ashes. Farbrace worked under Bayliss when the Australian was head coach of Sri Lanka before taking charge of the Lankans himself in 2013. The pair were reunited again when Bayliss was appointed prior to the 2015 Ashes that England went on to win on home soil. Bayliss has long made it clear he will be standing down next year and he believes Farbrace is well-placed to take over.

England announced last week that Farbrace will be in charge for the T20 International at Edgbaston that ends Australia’s tour on Wednesday and the 3 subsequent T20Is with India early next month — an appointment that will allow Bayliss to run the rule over promising county players.

Asked if Farbrace could succeed him on a permanent basis, Bayliss replied: “Definitely. If that’s what he wants to do, then I’m all for it.” Bayliss said his short break from coaching the national side in all three formats, and Farbrace’s temporary spell in charge, were both agreed with ECB Director Andrew Strauss six months ago. “Straussy spoke to me … With that in mind, to give Farby some exposure with the top team … He’s had success doing it before…this is an opportunity to get that experience.”

Bayliss will head into his short break on the back of overseeing England’s first 5-0 series win against his native Australia in any format in more than 140 years of international cricket between the arch-rivals.

The sweep was only made possible by Jos Buttler‘s superb 110 not out in the fifth ODI, at Old Trafford on Sunday. England were in dire straits at 114 for 8, chasing a seemingly modest 206 to win against reigning world champions Australia, only for Buttler to turn the game on its head with a superbly constructed century.

This season has also seen the Buttler restored to the Test side in one of the most eye-catching moves by Ed Smith, England’s new national selector.

“It’s unbelievable,” said Bayliss of Buttler’s unbeaten hundred. “I can’t really describe how good it is. Red ball, white ball, T20 — there are not too many better in the world at the minute.”

Bayliss has coached the likes of Kumar Sangakkara but added that Buttler lost little in comparison: “He’s right up there in the top echelon — a bit different to some of the guys I’ve worked with before, but he’s devastating. He can play that role he did [at Old Trafford] in smart fashion — but when he needs to he knows he can pull the power out and put the foot down.”

England, for all they are the top-ranked side in men’s ODI cricket, have yet to win the men’s World Cup and Bayliss said Sunday’s dramatic success was a timely ‘reminder’ to the 2019 tournament hosts that they are not the finished article: “We still have work to do. If we didn’t have work to do we wouldn’t have been 114 for 8. To me that’s a bit of a reminder that there are still some things to work on. “The good thing is we were able to win eventually from a poor position. To get a win from that situation will give Jos and the rest of the guys a blueprint of how to go about it, and the confidence to know that we can do it.” 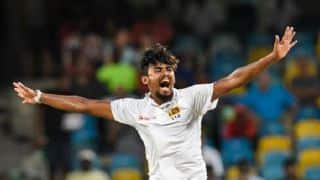 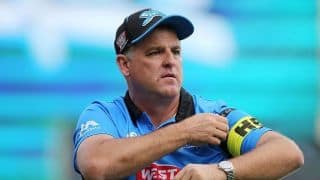