Australian fast bowler Josh Hazlewood was today ruled out of the upcoming limited overs series against India after suffering a side strain during the first Test against Bangladesh.

Australian fast bowler Josh Hazlewood was today ruled out of the upcoming limited overs series against India after suffering a side strain during the first Test against Bangladesh. The injury, suffered on the third day of the match, also meant that Hazlewood would not play the second Test against Bangladesh. Hazlewood suffered the strain while bowling the second over of the third day. He looked in considerable discomfort as Ashton Agar finished the over. ALSO READ: David Warner retires hurt after being struck by Josh Hazlewood-bouncer

“He’s (Hazlewood) going to be really hard to replace,” his fast bowling partner Pat Cummins said at the end of the day. He’s played all but one of the last 30 Tests. He said it is going to be pretty hard sitting at home watching, he hasn’t done that for three or four years. So he’s a big member around the group,” Cummins said. Australia are scheduled to play five ODIs against India, starting September 17 in Chennai. The ODI series will be followed by three Twenty internationals.

Currently, Australia are engaged in a riveting battle against Bangladesh in the 1st Test at Mirpur. Set a target of 265, Australia finished at 109 for 2 at stumps on Day 3. Earlier, in the first innings, Australia, visiting Bangladesh after 11 long years, had conceded a 43-run lead. 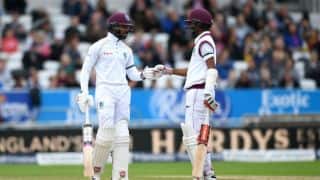