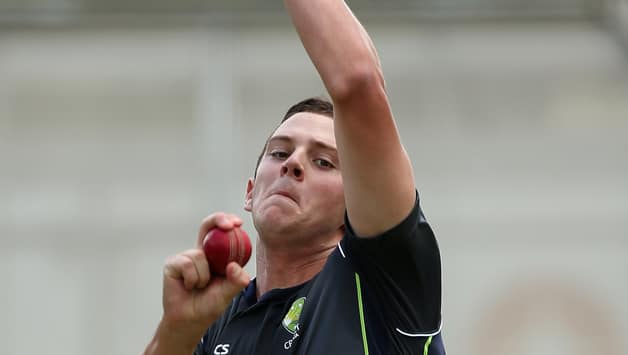 Hazelwood and Sandhu will join the squad in Hobart Wednesday evening while Handscomb will travel at the end of the Bupa Sheffield Shield match between Victoria and Queensland, said a CA press release.

Handscomb will only play in Friday’s third match at the Bellerive Oval, Hobart. Hazlewood and Sandhu will travel with the squad to Sydney Saturday where they will play the last two games at the Sydney Cricket Ground (SCG).

Meanwhile, Kane Richardson has been withdrawn from the squad after scans revealed a minor stress reaction in his back.

Australia A physiotherapist David Beakley said: “Kane reported increasing lower back pain during the match on Monday and consequently travelled to Melbourne today for further assessment. While scans have cleared him of any major injury they did reveal a minor stress reaction in his lumbar spine. Kane will now enter a period of rehabilitation and his return to the field will be determined by the speed of his recovery.”

CA’s chief medical officer Justin Paoloni said: “Shaun Marsh underwent surgery yesterday to repair a ruptured hamstring tendon behind his right knee. The surgery was successful and he is expected to make a complete recovery. Shaun will undergo a rehabilitation program over the next 8-10 weeks and his return to competitive cricket will be determined by the success of this programme.”