South African cricketers on Monday celebrated their Test series win over Sri Lanka by 1-0, after forcing a draw in the second Test at the Sinhalese Sports Club (SSC) in Colombo. South Africa, chasing 369 runs, survived a tense final hour wherein they were left with three wickets in hand and denied Sri Lanka a series-levelling win. JP Duminy and Vernon Philander expressed their delight on the microblogging website Twitter.

A gritty South African tail fought off Sri Lanka‘s spinners to snatch a nerve-jangling draw in the second Test and seal a historic 1-0 series win on the island.  The series victory propelled South Africa to the top of world Test ranking ahead of Australia and also ended their 21-year-old jinx in Sri Lanka where they last won a Test series in 1993.

South Africa had won the opening Test in Galle by 153 runs to go 1-0 up in the two-Test series. Chasing a target of 369, the visitors were reeling at 148 for eight but tailenders Vernon Philander (27 not out) and Imran Tahir (four not out) hung on in the final nine overs to finish on 159 for eight, reported AFP.

The South Africans took to Twitter to express their delight after the series win.

Tough tour but glad to win it. Always great winning in the sub…..#ProudlySA http://t.co/QROdsWKwjn 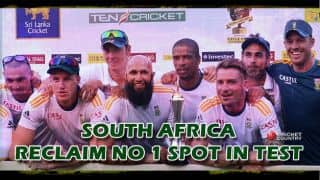 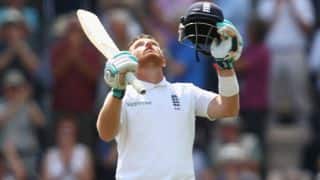