Kagiso Rabada has received a fine of 50 per cent of his match fee and three demerit points after a disciplinary hearing following his denial of the charge.

South African fast bowler Kagiso Rabada was on Monday banned for the two remaining Tests against Australia and admitted that he would have to change how he celebrates wickets. Rabada was found guilty of “inappropriate and deliberate physical contact” with Australian captain Steve Smith after dismissing Smith in the first innings.

He was fined 50 percent of his match fee and issued three demerit points after a disciplinary hearing following his denial of the charge. That took his total of points after three previous offences to eight and triggered an automatic two-Test ban. “It’s going to have to stop,” he said. “I’m letting the team down and letting myself down.”

He was speaking after a man of the match performance in South Africa s six-wicket win in the second Test against Australia, but before the verdict from the International Cricket Council was announced.

Cricket South Africa (CSA) immediately announced they would appeal the decision and said they were seeking legal opinion. CSA said Rabada would remain suspended unless a judicial commissioner was appointed early and allowed him to play pending a final decision.

Rabada accepted a second charge after a send-off of David Warner in the second innings and received a further fine of 15 percent of his match fee and an additional demerit point.

Match referee Jeff Crowe said: “I found that there was contact between Rabada and Smith, and in my judgement the contact by Rabada was inappropriate, and deliberate. He had the opportunity to avoid the contact, and I could not see any evidence to support the argument that the contact was accidental.

“It is also disappointing that this has happened the day after the pre-match meeting I had with both teams, where the importance of respect for opponents was highlighted.”

Rabada said he would need to avoid getting into close proximity with opponents.

“I won t change the way I express myself but I will get far away from the batter,” he said.

Rabada said he had contested the charge on the Smith incident because he believed he had not made deliberate contact with Smith’s shoulder, which his captain Faf du Plessis described as “a shirt flick.”

“If I knew I did it deliberately I wouldn’t have contested it,” said Rabada. “Honestly, I didn’t feel contact in that moment. I was just so pumped up.”

Rabada said it was different from the case against him when he gave Ben Stokes of England a send-off in a Test at Lord’s last year, which resulted in a single demerit point which added to a previous three points ruled him out of the next Test.

“With the Stokes incident I didn’t contest it because I knew I did it,” he said.

He described his emotions as “bittersweet” after one of his best Test matches. Anticipating the ban, he said: “I would have loved to be playing in the next game, especially coming off a performance like that. I felt really good in this Test match.

“If I do get banned I will have to see it as a big learning curve and not repeat the same mistake because I’ve repeated the same mistake in the eyes of the umpires. I m not happy about it.”

The ICC also announced a 20 percent fine and one demerit point for Australia s Mitchell Marsh, who accepted a charge of using “obscene or offensive language” after being dismissed by Rabada on Monday. 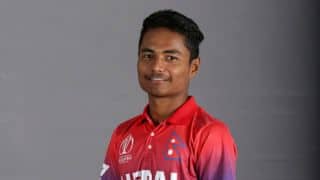