Kagiso Rabada was suspended for making physical contact with Australia skipper, Steven Smith during the second Test at Port Elizabeth.

In a remarkable turn of events, South Africa‘s speedster Kagiso Rabada‘s ban has been overturned by ICC. After his 11-wicket haul propelled South Africa to a series-levelling win over Australia in Port Elizabeth, Rabada was suspended for making physical contact with Australia skipper Steven Smith. He was fined 25 per cent of his match fees and lost one demerit point. Rabada challenged the appeal, which was followed by a six-hour-long hearing on Monday. The decision has been reverted as an outcome, to bring a huge sigh of relief for hosts. The third Test begins March 22 at Cape Town, and Rabada is certain to play.

And cricket is a happy sport again!

Rabada’s case was taken up by high-profile lawyer Dali Mpofu. His level 2 charge was quickly downgraded to level 1. Following that, Rabada challenged the earlier verdict (which ruled him out of the final two Tests), which led to his favour too. At the time of the final hearing, captain Faf du Plessis and team manager Mohammed Moosajee also accompanied him.

Moosajee was quoted as saying by ESPNCricinfo: “I think in any hearing you’ve got to be as happy as you can be. We’ve put our side of the story across and now it’s up to the judicial commissioner to make a stand on what he thinks. We’ve said it from the beginning…he needs to make sure he plans as if he’s going to play. It would be fantastic. I think everyone wants to see him on the field.”

The full judgment was made by ICC code of conduct appeal commissioner Michael Heron, a notable New Zealand QC. The statement is expected to be released by ICC shortly as Rabada will begin training with his teammates at Newlands later on Tuesday. 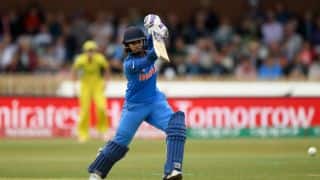