Jacques Kallis hit his second Test double century as South Africa continued to pile on the runs on the second day of the third and final Test against Sri Lanka at Newlands on Wednesday. 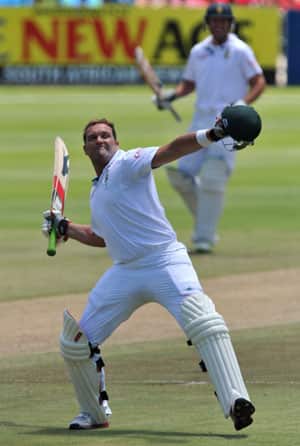 Jacques Kallis hit his second Test double century as South Africa continued to pile on the runs on the second day of the third and final Test against Sri Lanka at Newlands on Wednesday.

Kallis made a career-best 224 as South Africa reached 453 for four at lunch. AB de Villiers was unbeaten on 84.

Until Herath’s success, it was another trying morning for the Sri Lankans, who had further cause to regret their decision to send South Africa in to bat in a series-deciding contest.

Kallis and De Villiers added 106 runs in 28.3 overs before lunch.

Indicative of the dominance of the batsmen, the Sri Lankan bowlers were able to deliver only two maiden overs, both by the left-armed Chanaka Welegedera early in the day. (AFP)