Australia A notched up their second win of the Quadrangular A-team One Day series with a six-wicket win over South Africa A at the Marrara Oval , thanks to some fine bowling performances by Kane Richardson and Ben Cutting.

Australia A bowling unit, which was criticised after conceding 82 runs from 10 overs in their shock defeat to the National Performance Squad (NPS), made a brilliant comeback as they skittled the South Africans out for a paltry total of 160 n 49.2 overs.

Richardson ended with impressive figures of 3-13 from 10 overs. The Darwin native had earlier picked five wickets in their 28-run win over India A. Cutting on the hand got four scalps for 27 runs and ensured the visiting batsmen never got a chance to settle throughout their innings.  “I think we tried to go out there and apply ourselves a bit better today,” Cutting was quoted as saying to cricket.com.au after play.

The Queenslander’s spell included a fiery bouncer that floored Ferhaan Behardien, who managed to bat on from that blow. Among the Proteas, Heino Kuhn top-scored with a knock of 30 runs from 36 balls.

Australia A skipper Cameron White and wicket-keeper Peter Nevill made a slow start to their chase as Beuran Hendricks and Marchant De Lange were looking dangerous with a hostile opening spell.

Nevill, who has impressed everyone with his work behind the stumps, was dismissed at 14 from 44 balls as the home side lost their first wicket with 55 runs on the board. Cutting was next to arrive at the crease in a surprise decision. The move was seen as an attempt to chase the total down in less that 40 overs to earn a bonus point as Cutting is known for his pinch-hitting abilities. He was however, removed within three deliveries for a duck.

White played a patient knock of 68 runs from 113 balls to guide his team to turbulent times before falling prey to a vicious bouncer from De Lange with 39 runs needed off  86 balls. The target was eventually achieved by the watchful pair of Callum Ferguson and Tom Cooper in the 46th over.

Australia will now face an upbeat National Performance Squad on Saturday, an opportunity to redeem themselves for their earlier defeat. “We obviously want revenge and we’ll probably drive it into them a little bit harder. If we do everything that we did today on Saturday against the young fellas, then it shouldn’t be a problem,” said Cutting.

In the other match at Gardens Oval, India A secured outright top spot on the table with an emphatic six-wicket win over the NPS to claim their second bonus point of the series. 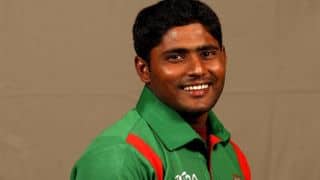