New Zealand's batting woes against South Africa continued as they slumped to 65 for four at stumps on day two of the second Test in Hamilton, squandering a fine effort with the ball. 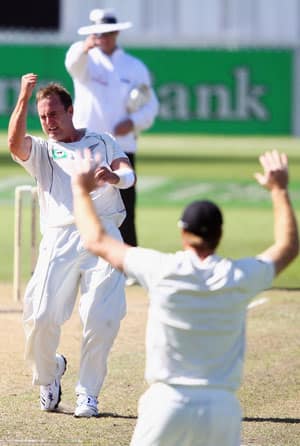 New Zealand’s batting woes against South Africa continued as they slumped to 65 for four at stumps on day two of the second Test in Hamilton, squandering a fine effort with the ball.

The Black Caps, bowled out for 185 on the opening day, looked to have clawed their way back into contention when a five-wicket haul from Mark Gillespie helped restrict the Proteas’ first innings lead to 68.

But New Zealand made a disastrous start to the second innings, reduced to seven for three in the first five overs as openers Rob Nicol (1) and Martin Guptill (1) failed again and Brendon McCullum went for five.

Skipper Ross Taylor was again called on to launch a rescue mission managing a 57-run partnership with Kane Williamson before falling lbw to Dale Steyn for 17 in the second last over of the day.

Steyn took two for 10 and Vernon Philander two for 21 as New Zealand ended the day still three runs short of South Africa’s first innings total of 253, facing a mammoth task to get back into the match.

Kane Williamson was unbeaten on 41 for the Black Caps, alongside Daniel Vettori, who was yet to score.

South Africa started the day at 27 for two and endured a torrid spell from Gillespie, struggling at 133 for six in the first hour before AB de Villiers and the lower order steadied the innings.

De Villiers’ gritty 83 and a valuable unbeaten 35-run cameo from Morne Morkel helped South Africa overhaul New Zealand’s total before the tourists were bowled out for 253 at tea.

Gillespie, recalled into a revamped New Zealand attack after more than three years in the Test wilderness, finished the innings with five for 59.

South Africa added 35 to their overnight total before he dismissed Hashim Amla for 16, the batsman attempting to guide the ball through backward point but sending a low catch to Williamson.

He struck again in his next over to claim the prized scalp of Jacques Kallis, who scored a century in the first Test.

Kallis never looked comfortable against Gillespie and was lucky to top-edge a short-pitched ball safely over the boundary for six.

He dabbed tentatively down the leg side two balls later, doing just enough for the face of the bat to kiss the ball and travel to Kruger van Wyk behind the stumps.

Gillespie made it three when he trapped Alviro Petersen (29) lbw with a ball that hit the batsman low in the pads, a television review umpire upholding the original decision the delivery was plumb and headed for middle stump.

The collapse continued with Gillespie’s fourth wicket in four overs when Jacques Rudolph, another century-maker in the first Test, clipped an edge to van Wyk, out for one after facing only four balls.

New Zealand maintained the pressure with some tight bowling after lunch and were rewarded when Gillespie took his fifth with a full, straight ball that slipped through the guard of Mark Boucher (24) and into the stumps.

De Villiers, South Africa’s last recognised batsman, brought up his 28th Test 50 and worked well with the tail-enders, notching up a 34-run partnership with Vernon Philander (14).

He was unlucky to be dismissed on 83, blocking a fizzing Vettori delivery that bounced back from the pitch and into the stumps.

A free-hitting Morkel kept the scoreboard ticking, notching five fours and one six before New Zealand wrapped up the innings. (AFP)