New Zealand skipper Kane Williamson was dismissed on a score of 97 from 119 balls during the fifth and final ODI against Pakistan at the Sheikh Zayed Stadium in Abu Dhabi on Friday. New Zealand were batting on a score of 202 for the loss of three wickets during the 42nd over. Williamson continued his good form with the bat, having scored 123 in the previous game at the same venue. Ross Taylor on the other end brought up his 27th ODI half-century in 64 balls.

The end came about when Williamson tried sweeping a tossed up delivery by Shahid Afridi, to which the batsman got a top-edge on to his helmet, from where it deflected into wicket-keeper Sarfraz Ahmed’s hands. This was the first time Williamson was dismissed in the nervous nineties.

New Zealand won the toss and elected to bat. While New Zealand decided to bring in Anton Devcich and Nathan McCullum in place of Corey Anderson, who has been woefully out of form in the series so far, as well as Daniel Vettori, who had to fly home to attend a wedding. Pakistan decided to replace Mohammad Hafeez and Sohail Tanvir with Asad Shafiq and Zulfiqar Babar.

The five-match series is currently level 2-2 after New Zealand won a thriller of of a game in the fourth ODI at the same venue on Wednesday. A series victory will be a great morale booster for the winners, with both teams set to play a tournament or two more after the end of the series before the onset of the World Cup. The two sides had earlier played a three-Test series and a two-match Twenty20 International (T20I) series, both of which were drawn 1-1. 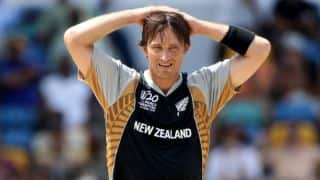 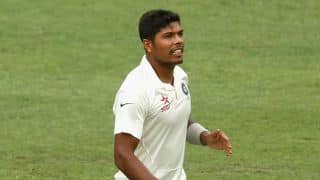