Williamson termed the Indian players as great ambassadors of the game and also simply loves the kind of passion fans have for their national side.

Still celebrating the world title that gave New Zealand cricket their most memorable win in the sport’s history, captain Kane Williamson recalls the massive moment in the high-octane final against India in Southampton which had the potential to change the course of the match. Williamson, who stitched an unbeaten 96-run for the third wicket with Ross Taylor, scored a gritty half-century to help New Zealand beat India by 8 wickets and lift the inaugural World Test Championship title last week.

The potential game-changing moment on the Reserve Day of the WTC Final came when the 30-year-old Williamson was adjudged LBW by on-field umpire Michael Gough off Ravichandran Ashwin’s bowling. However, Williamson decided to review, and the DRS showed that the ball was missing the stumps.

“It was close. But the way Ravi spins the bowl, I thought I might have a chance. So I decided to review it, and It turned out my way,” said the New Zealand skipper in an interview with India Today.

India, who were bowled out for 170 in their second innings, on a sunny final day in Southampton, left New Zealand to chase a paltry 139-run taget. The Blackcaps won the match comfortably in just one session and lifted their second ICC trophy after the 2000 Champions Trophy.

“As we know, this Indian team is a formidable side. It’s a great side and we are proud to achieve a win in this match but it doesn’t take away anything from the fact that how strong they are and what quality they have.

“No doubt they will win plenty more, you know their quality. They are relentless, they have a pace attack which is best in the world, incredible spin bowlers and batting needs no mention. The depth that they have created,” Williamson waxed eloquent.

Williamson termed the Indian players as great ambassadors of the game and also simply loves the kind of passion fans have for their national side.

“Emotion that a country brings for sport, we can all appreciate having India and their passion is rewarding. They (players) hold themselves as ambassadors of game,” he added.

Going into the final day, Williamson felt that all three results were possible in various percentages but everyone perhaps felt that with lack of time, draw looked the most imminent result.

“For us it was very much going in the day, expecting every result was realistic and trying to do as well as we could. Nothing different from the last few days and see how games unfurl and opportunity arises.”

Williamson agreed that getting Kohli and Cheteshwar Pujara out early did set it up nicely for them.

“It was great to take early wickets on that, that set up more chances of result on that day. India team counter-attacked after that and India had a fair shot too. The surface was offering to bowlers. It was intense for us,” the Black Caps skipper concluded. 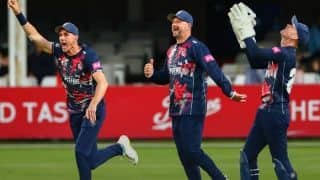