An analysis conducted on his bowling action revealed that his elbow was bent.

New Zealand batsman Kane Williamson, whose bowling action had earlier come under suspicion for being suspect, has been banned from bowling. An analysis conducted on his bowling action revealed that his elbow was bent beyond the allowed 15-degree benchmark.

According to reports by 3news.co.nz, Williamson said, “I note the findings of Dr Craig Ranson and his team at Cardiff Met and will concentrate on changing whatever’s necessary to return to the bowling crease. Clearly, the onus is on me to satisfy assessors as to the legality of my action, and I’m aware I have some hard work in front of me to achieve that goal. It’s never nice, going through this sort of process but it will be worth it if I can manage to bowl again at international level.”

Mike Hesson, current coach of the Black Caps, expressed confidence that Williamson would soon sort things out and get back to bowling. “Kane’s disappointed, clearly — anyone in his situation would feel the same way. He now has a challenge on his hands if he’s to bowl again at the top level, but we’re very hopeful he can manage it.” India tour of England 2014: Figures demonstrate why the Lord’s win is special 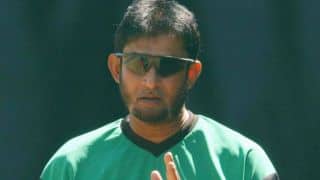