Hopeful of forcing a comeback in the national side soon, Pakistan's top leg-spinner Danish Kaneria says he is working on perfecting 'slider' delivery, very effectively used by Australian great Shane Warne, so that he could meet the demands of fast changing game. 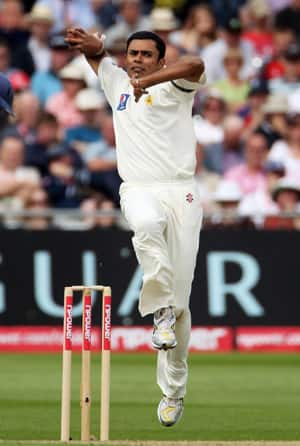 Hopeful of forcing a comeback in the national side soon, Pakistan’s top leg-spinner Danish Kaneria says he is working on perfecting ‘slider’ delivery, very effectively used by Australian great Shane Warne, so that he could meet the demands of fast changing game.

Kaneria has not played for Pakistan since last year due to his questioning in a spot-fixing investigation revolving around a Pro-40 match between his county Essex and Durham in 2009.

Kaneria has used the slider delivery with great success in an ongoing Twenty20 tournament in Pakistan.

“I am desperate to establish myself in 50-overs and particularly T20 cricket and I worked hard on developing this delivery with the specific purpose of showing everyone I can be an effective wicket-taker even in the shortest form of the game,” Kaneria told PTI.

The leg-spinner who is Pakistan’s most successful spinner with 261 Test wickets is keen to make a mark in T20 cricket.

“I am playing domestic cricket and that is allowing me to test the ‘slider’. Plus I am also working on some other new wicket-taking deliveries,” Kaneria said.

Like many current international players Kaneria too is keen to play in lucrative T20 leagues.

“Players who are in demand are paid handsomely for playing in the Indian Premier League and in England, South Africa and Australia and I am also keen to play in these foreign leagues as it is also a test for me as a leg-spinner.”

Kaneria only the second Hindu to play Tests for Pakistan pointed out that he was only 30 years old and still had lot of cricket left in him.

“I am confident that pretty soon this issue of me being cleared for national selection will also tide over and I can play for Pakistan again. So I am already preparing for a comeback and I want to surprise everyone with variety.

“The slider which Warne perfected is certainly proving to be a good wicket taking delivery for me,” Kaneria said.

He said a meeting with Warne last year in England had forced him to rethink his role as a leg-spinner and convinced him to be more attacking in his bowling.

“Now I look to take wickets because that is what matters in any form of the game. If you can pick two or three wickets in a T20 match you have done a good job for your side.”

The slider is a delivery that is bowled with a leg-spin action but skids straight on.

Kaneria, who has played 61 Tests but just 18 ODIs for Pakistan and is yet to play a T20 international, said while Test cricket remained the ultimate challenge for a spinner but with the growing popularity of T20 cricket the survival of spinners depended on being good enough in the shortest format.(PTI)

Srikkanth's tenure extension to be decided at AGM