Former Indian captains Kapil Dev and Mohammed Azharuddin on Friday backed Sachin Tendulkar, who is under pressure to call time on his illustrious career, saying that he should decide when he wants to retire. 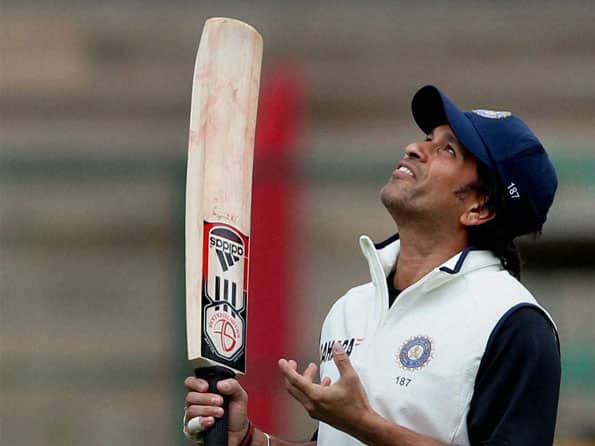 Former Indian captains Kapil Dev and Mohammed Azharuddin on Friday backed Sachin Tendulkar, who is under pressure to call time on his illustrious career, saying that he should decide when he wants to retire.

After his failure in the recent New Zealand Test series in which he was bowled three times in a row, there has been a debate whether Tendulkar should retire now.

However, Tendulkar does not have retirement in mind as he has said he would retire only when he stops enjoying playing the game.

“Honestly, I wanted him to retire after the World Cup win. But the need of the hour is that I will stand by him. I want to back him and want him to go with a big smile,” Kapil, the first World Cup wining captain, said.

“It is tough to leave a game you love. It was tough for me as well. And he has got so much in the last 23 years. So. it’s wrong for us to discuss (retirement),” Kapil said.

Azharuddin, one of the most successful Indian captains, suggested Tendulkar to play more matches to rediscover his form.

“I have found that he has become a little slow. Reflexes go slow with age and pressure. It’s been 23 years now and it takes a toll. Everyone is talking about Virat Kohli. He is doing well because he has played so many matches. Sachin played the two Test matches (against New Zealand) after three months. I think he needs to play more.

“Now that he wants to continue playing, he should play more matches. And when he goes, he should go with a smile, everyone should know it before and then celebrate that game,” Azhar said at ‘India Today Youth Summit’ here.

However, Kapil took a jibe at Tendulkar for not expressing himself clearly as he hardly gives opinions.

“I have not seen a better sportsperson that India has produced. But in his 23 years as a player, I still don’t know him. That’s the problem. We must know his opinion,” he said.

Both Kapil and Azhar also asked youngsters to excel in Test cricket and not get distracted by Twenty20 format.

“No cricket is bigger than Test cricket. T20 is exciting for youngsters. There is fun on that track but there is danger too. It’s good to see sixes and boundaries but real cricket is Test cricket,” Kapil said.

Echoing the same sentiment, Azhar said, “Test cricket is the real test of a cricketer. I think, the ICC and all the cricket Boards should make efforts to ensure that Test cricket stays no matter how many formats come.”

India’s young cricketer Unmukt Chand, who shared the dais with the two former captains, said he was keen to play all three formats.

“IPL has helped me lot. Sharing the dressing room with players such as Virender Sehwag and Mahela has helped. I want to do well in all formats,” Chand, who led India to Under-19 World Cup win in Australia, said.

Azhar and Kapil also took questions from the audience.

Responding to one such query, Kapil said the expectations from fans put them under lot of pressure while playing against Pakistan.

He also said that they did not do anything different to win the World Cup final against the mighty West Indies team in 1983 but many stories are spun after the success. (PTI)