The International Cricket Council (ICC) has sanctioned five players, including three from Bangladesh - Towhid Hridoy, Shamim Hossain and Rakibul Hasan - and two from India - Akash Singh and Ravi Bishnoi for the scuffle.

India colts not only lost the ICC U19 Cricket World Cup 2020 final but also the respect of legendary India captains who have expressed their displeasure over the behaviour of young crop of cricketers and demanded a ‘stricter action’ against the guilty. After Bishan Singh Bedi, former India captains – Kapil Dev and Mohammad Azharuddin have openly called out for a stringent action over the scuffle which broke out in Potchefstroom after the U19 World Cup summit clash on Sunday.

Bangladesh U19 team defeated defending champions India by three wickets (via DLS) in the final to lift their maiden world title at the Senwes Park on Sunday. After the match, players of the two teams were seen engaging in an exchange of words while some crossed the line by pushing each other and shoving on the field.

“I would like to see the board (BCCI) take some strict action against the players to set an example. Cricket is not about abusing the opponent. I am sure there is enough reason for these youngsters to be dealt with firmly by BCCI,” Kapil was quoted as saying by The Hindu.

“I welcome aggression, nothing wrong in it. But it has to be controlled aggression. You can’t cross the line of decency in the name of being competitive. I would say it was unacceptable that youngsters put up such an obnoxious display on the cricket field,” he added.

The International Cricket Council (ICC) has sanctioned five players, including three from Bangladesh — Towhid Hridoy, Shamim Hossain and Rakibul Hasan – and two from India – Akash Singh and Ravi Bishnoi for the scuffle.

Azharuddin also reiterated what Kapil said, insisting that players need to be disciplined.

“I would take action against the errant Under 19 players, but I also want to know what role has the support staff played in educating these youngsters. Act now before it is too late. The players have to be disciplined,” Azharuddin said.

Earlier, legendary spinner Bishan Singh Bedi has lashed out at the Priyam Garg-led team, saying their behaviour was disgusting and disgraceful.

“You bat, bowl and field badly that happens, but there’s no excuse for behaving badly. The behaviour was disgusting and most disgraceful. The innocence of that age was not visible at all,” Bedi was quoted by Mid Day.

Bedi, who represented India in 67 Tests and 10 ODIs, said the behaviour of the Bangladesh cricketers is not our problem.

“Look, what Bangladesh do is their problem, what our boys do is our problem. You could see that there was abusive language used,” he said 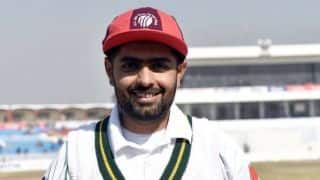