Uttarakhand batsman Karanveer Kaushal became the first batsman to register a double century in the history of the Vijay Hazare Trophy.

Kaushal and Saxena added 296 runs for the opening wicket, which is another record. They surpassed the 277-mark that Shikhar Dhawan and Aakash Chopra had put on for Delhi against Punjab in 2007-08.

Playing his first Vijay Hazare Trophy tournament, Kaushal s maiden double-century is now the highest individual score in the tournament s 26-year-old history, overtaking Ajinkya Rahane s 187 for Mumbai against Maharashtra during the 2017-2018 season. It took Kaushal 38 balls to bring up his half-century and took another 32 to bring up his 100. He smashed 18 boundaries and nine sixes during his 135-ball knock at a strike rate touching 150. He was eventually dismissed for 202 in the 47th over to Mandup Bhutia.

This is Kaushal s third century of the season, having scored 101 against Puducherry, followed by 118 against Mizoram, making him the second-highest run-getter this season. In seven games, Kaushal has 467 runs at an average of 77.83 and a strike rate of 122.25, next only to Punit Bisht s tally of 488 runs.

“I never thought or expected I’d get a double-century,” Kaushal told ESPNcricinfo. “I just played as the innings went on. Only when about 30 runs were left did I think that, ‘Okay, I can try for a double-century’. I felt very nice when I completed it, but I didn’t know then that it was a record. I got to know that I was the first one to score a double-century after I came back to the dressing room.

“I didn’t know it was Ajinkya Rahane’s record that I broke till you told me now. I didn’t even know our opening partnership was a record till now.”

Kaushal revealed how he continuously tried to make it to the Uttar Pradesh team for the last 10 years without any success, and it wasn t until when Uttarakhand was declared as one of the nine new teams to feature in the Vijay Hazare Trophy that the 27-year-old got his chance.

“I had been trying to get into the Uttar Pradesh team for the past eight to ten years without success,” he said. “In the last two years, I attended some camps they held also, but never got selected. I attended their T20 camp, and also their Vijay Hazare camp. This is the first time that I’m playing at this level. This year I didn’t try there, because Uttarakhand got a team. I knew that there is very tough competition in the Uttar Pradesh team, and being from Dehradun this (Uttarakhand) is my state so I knew that there will be more support here and people have seen me play cricket here.” 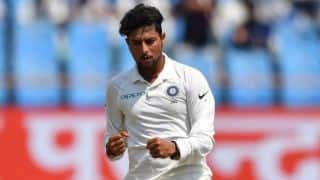