Young Harshal Patel broke the backbone of Karnataka's batting line-up with a career-best eight-wicket haul to put underdog Haryana on the driver's seat on the opening day of their Ranji Trophy quarterfinal match on Monday. 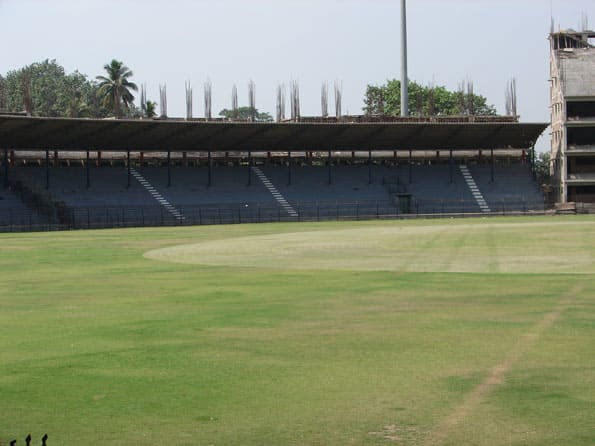 Young Harshal Patel broke the backbone of Karnataka’s batting line-up with a career-best eight-wicket haul to put underdog Haryana on the driver’s seat on the opening day of their Ranji Trophy quarterfinal match on Monday.

Opting to bat on a greenish wicket, hosts Karnataka could manage a niggardly 151 as the 21-year-old Patel wreaked havoc in his three short but productive spells to return with awe-inspiring figures of 16.5-7-40-8.

In reply, Nithin Saini and Rahul Dewan complemented Patel’s bowling, knitting together 120 runs for the unbroken opening stand at the close of play.

Unlike the Karnataka batsmen, Saini (55 not out) and Dewan (63 not out) applied themselves on the M Chinnaswamy stadium wicket and batted with rare aplomb to slowly but assuredly take Haryana towards the semifinals.

Saini struck 11 fours during his 152-minute vigil at the wicket while Dewan hit 10 boundaries during his imperious essay.

Karnataka have their task cut out in the remainder of the contest. They can come back into the game only if they could contain Haryana to a first innings total under 350.

But considering their bowling resources, it is unlikely that the six-time champions would make a fist of the Haryana challenge.

Bowling in seamer-friendly conditions, Patel raked in the scalps of K B Pawan (0), Ganesh Satish (11) and Bharat Chipli in his first spell (7-4-18-3) to leave Karnataka staggering on the ropes at 40 for three.

Returning for another spell after Mohit Sharma had the dangerous Robin Uthappa snared at second slip by Sachin Rana, Patel picked up the important wickets of in-from batsman Stuart Binny (22) and Amit Verma (5).

Binny looked the most comfortable among the Karnataka batsmen, before he shouldered arms to a Patel delivery which curled back to hit his unprotected off stump.

Verma followed his ebullient partner into the pavilion, nicking Patel to Sachin Rana at second slip.

C M Gautam (26) and Sunil Raju (21) offered brief resistance by producing 40 runs for the seventh wicket and raised hopes of a Karnataka fightback.

But skipper Amit Mishra put paid to their hopes, having Raju snaffled by Sunny Singh at first slip.

Brought on to bowl with intent to run through the Karnataka lower order, Patel removed Gautam, K P Appanna and S L Akshay in a trice to complete Karnataka’s misery. (PTI)