Chirag Khurana’s fifty has rallied Maharashtra on Day One of their Ranji Trophy 2013 final against Karnataka at Hyderabad. But a poor shot from the well-set batsman gifted his wicket away. Khurana tried to improvise and sweep a delivery by Karun Nair and was out leg-before for 64.

In the morning session, Karnataka had struck thrice, including the key wicket of Kedar Jadhav, to put themselves in a stronger position. It was Khurana who kept them fighting and has given the Maharashtra batting some solidity.

Maharashtra started after lunch at 95 for three with Ankit Bawne and Khurana in the centre. With the sun beating down, one could sense that it was going to be hard work for the bowlers. Karnataka did start off with their pace bowlers as Abhimanyu Mithun got the ball rolling. A highlight was a straight drive for four by Bawne.

Meanwhile, Khurana picked up his scoring rate. While he defended solidly, he looked for more scoring opportunities. Sreenath Aravind, the fast-bowler, also doubled up as a left-arm spinner,  was driven by Khurana through the covers to move closer to his fifty. He did ultimately get there, but had a few scares off a Shreyas Gopal over.

Gopal had Khurana edge one past first slip for a couple and then he edged a doosra that dissected the keeper and the slip. But largely, Khurana has looked in good control. 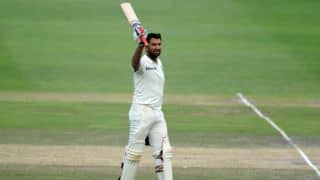