Garry Sobers and Bobby Simpson are the only ones to have done this before Nair.

Karun Nair slammed an unbeaten 303 against England in the ongoing fifth and final Test at MA Chidambaram Stadium, Chepauk, Chennai. Nair joined an elite club of batsmen whose first Test tons were triple-hundreds. Garry Sobers and Bobby Simpson are the only ones to have done this before Nair. Sobers unbeaten 365 had stood as the world record for the highest Test score for over three-and-a-half decades, while Simpson s massive innings came in a yawnathon during the 1964 Ashes. Drafted in as replacement for the injured Ajinkya Rahane, Nair was playing his third Test. He had been run out for 4 on debut at Mohali, while his second innings, at Wankhede Stadium, Mumbai, had ended on 13. Nair, refusing to get dismissed cheaply for the third time on the trot, converted his first proper start to a triple-hundred.

However, unlike Sobers and Simpson, Nair had not scored a fifty before his triple-hundred. Nair thus became the first cricketer in history to convert his maiden fifty to a treble. Sobers had 6 fifties (highest score of 80) while Simpson had 15 (highest 92) by the time they reached their respective landmarks. Nair s innings came at astonishing pace as well: he faced a mere 381 balls, which gave him a strike rate of 79.5; and he hit 32 fours and 4 sixes. He was involved in three massive partnerships 161 with KL Rahul for the fourth wicket, 181 with Ravichandran Ashwin for the sixth, and 138 with Ravindra Jadeja for the seventh. 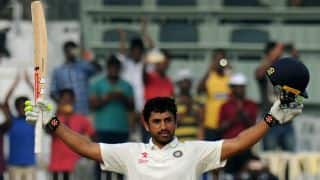 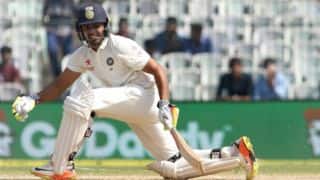 Cricket was in Karun Nair's blood since age 10, reveals his father following triple ton vs England