Simon Katich, a 56-Test veteran was stunned to be told last Tuesday that he was cut from Cricket Australia's 25-man list of contracted players for the 2011-12 season, despite being one of the country's most consistent performers. 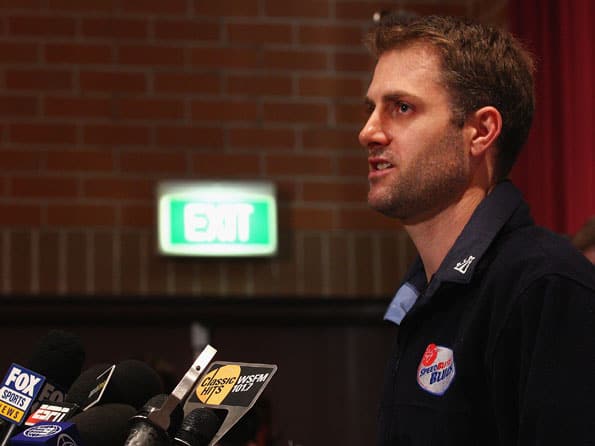 Simon Katich hit out at the selectors and Cricket Australia as he vowed to bat on after the contentious loss of his Test contract for next season.

The 56-Test veteran was stunned to be told last Tuesday that he was cut from Cricket Australia’s 25-man list of contracted players for the 2011-12 season, despite being one of the country’s most consistent performers.

Katich on Friday called a press conference in Sydney but instead of what was anticipated to be the announcement of his retirement, the 35-year-old opening batsman said he would continue playing for his New South Wales state side.

The no-frills left-hander did not miss the opportunity to castigate the selection panel and the governing body for their part in what he called an “absolutely ridiculous” situation.

Katich, who has averaged 48 in Tests over the last three years and 45 throughout his career since 2001, ripped into what he said were the inconsistent selection policies of Chairman Andrew Hilditch and his panel.

“It certainly didn’t come as a total shock on Tuesday, only because I know how they operate. I’ve been through this situation before,” said Katich, who was told he was finished when he was dropped in 2008 only to fight his way back into the Australian team.

“I guess it was particularly disappointing because of the reason that was given,” he said.

“To be told that it’s because the opening partnership needs to be bedded down for 2013 (Ashes) when I know for a fact that Watto (Shane Watson) and I thoroughly enjoyed opening together and it’s been one of the bright spots of our team in the last two years.

“I find it very hard to believe that and as a result the system at the moment is not only just affecting me but it has also affected a number of other players.”

Katich, who was once touted as a future Australian captain, didn’t leave Cricket Australia out of his criticism.

“There are people above the selectors who make decisions on their (players’) future and they ratify the decisions that are made,” Katich said.

“I’ve only had a four-minute conversation with Andrew Hilditch on Tuesday and I haven’t heard from anyone from Cricket Australia since and I’ve been involved with the organization since 1999.

“I certainly made it clear to him what I felt about the decision. It wasn’t a personal nature, but it was just made expressing the fact that I didn’t agree with it.”

“There needs to be more consistency,” he said. “There were so many guys looking over their shoulders about whether they were going to play or not and if you compared it to how England were settled and prepared and there was no surprise that they had a very good campaign.”

Katich also called for professional selectors to be appointed to bring cricket into the modern sporting age.

In the meanwhile, he rubbished suggestions that Clarke might have had a hand in getting him ousted to settle scores for the dressing room tiff during which the two came to blows.

“I know there’s going to be a lot made of that,” he said.

“Having seen the press over the last few days and obviously Michael Slater made some comments the other day,” he added.

But Katich did admit that the two had a stand off which was reportedly triggered during the celebrations of a Test win over South Africa.

“I’d just like to say that in regards to that situation, I’m not going to shy away from the fact that we had the incident a couple of years ago.

“But we’ve both been really professional in handling that over the last two years and it hasn’t been a problem since then. So I don’t think that’s an issue,” he said.

The 35-year-old opener, who was axed by CA despite a reasonably good Test record, has decided to continue playing nonetheless. Katich said he was taking a risk by deciding to play on despite being unwanted at Test level.

“I take the risk by playing on that if I don’t perform I will get cut,” he said.

“It’s not nice to be dropped. I’ve been through it before, but I’m prepared to back myself and put myself through that stress because that’s what I love doing, that’s the buzz I get from playing the game.”

Did not break the Lord's window deliberately: Prior

I wanted to quit on a high note: Murali