Needing 266 to win in 36.1 overs, Kenya achieved the target with two deliveries to spare.

An electrifying century from opener Irfan Karim saw Kenya shock the Netherlands by four wickets on a dramatic final day of the group stage of the ICC World Cup 2015 Qualifiers.

Thursday’s results mean that the teams to progress to the Super Six stage of the International Cricket Council (ICC) event are Group A’s Scotland, Hong Kong and the UAE, alongside PNG, Namibia and Kenya from Group B.

In the match of the day, in the battle for the third and final Group B spot in the Super Six stage, two centuries were struck as Kenya defeated the Netherlands to leapfrog the Dutch into the top three.

After being sent in to bat, Netherlands set a cracking pace, with opener Eric Szwarczynski (57) and Wesley Barresi (137 not out) putting on a 148 run partnership that helped the Netherlands stack up a total of 265 for six.

However, the day belonged to Kenya opener Karim, the man of the match who wasted no time in the run chase, striking an 84-ball 108, including 14 boundaries. Ragheb Aga (86 from 70 balls) and Collins Obuya (37 from 24 balls) continued the pace, and Kenya reached 266 in 35.4 overs with four wickets in hand. 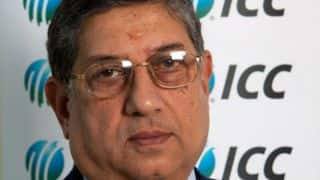