Kepler Wessels all praise for Kuldeep Yadav, Yuzvendra Chahal after the duo’s show in ODIs

Kepler Wessels all praise for Kuldeep Yadav, Yuzvendra Chahal after the duo’s show in ODIs

Mumbai: Hailing the quality of wrist spin bowled by the Indian duo of Yuzvendra Chahal and Kuldeep Yadav, ex-South Africa captain Kepler Wessels has said that his country’s batsmen were not used to playing wrist spin, and hence struggled against the two in the One Day series. “They struggled because most of the (current) South African batsmen hadn t played against wrist spinners very much. They were taken by surprise by the quality of spin and they hadn’t seen anything like that before, Wessels told PTI.

The Virat Kohli-led Indian team scripted history by winning a first-ever ODI bilateral series in South Africa with a stunning 5-1 margin. Orthodox leggie Chahal and Chinaman bowler Kuldeep shared 33 wickets between them and literally bamboozled the South African batsmen. Wessels, who is an expert panelist for the India-South Africa limited over series which is being aired on SONY TEN 1 and SONY TEN 3 channels, maintained that the Indian triumph did not come as a surprise to him.

“I wasn’t surprised by India’s performance as I knew going into the One Day series (after Tests) they are going to be competitive and they are a good One Day team. South Africa had a depleted side and they lost players through injuries (in the series) and their play against spinners was not good enough. India was the better side,” said Wessels, who had also played for Australia when his native country was in cricket isolation during the apartheid era.

Wessels agreed with Kallis’s views and quipped, “I agree with him and he is absolutely right.”

India lost the Test series 2-1 to South Africa held prior to the ODI rubber and a lot of former players have blamed India’s lack of sufficient preparation for the loss.

India will be touring England and Australia in the later part of the year and the 60-year-old former left handed batsman is of the opinion that India should go sufficiently in advance to these countries and must play warm-up matches prior to the Test rubber.

“They should definitely have some warm up matches in England because it takes some time to get used to the English conditions. In Australia also there will be additional bounce, so one or a few warm-up matches will be a good idea,” said the 60-year-old Wessels who had played in 40 Tests for Australia and then South Africa in a career spanning 12 years.

“They should have had a warm-up match in South Africa. I am not saying that would have impacted on them winning the series, but it would have helped them to get used to the conditions,” he signed off. 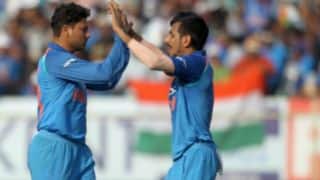